"Please forgive me for not accepting your rejection letter…"

Because the section of Sam’s memoirs following his wedding deals with a visit during his honeymoon to his boyhood home in Scotland, I’m inserting, as a kind of flashback, a few entries drawn from much earlier in the memoirs, when he talks about his childhood. Then I’ll resume the memoirs from where they left off in Part 27.

Finally, Mother decided we had to leave Edinburgh and after seeing an advertisement in the Scotchman (a newspaper), we were taken to Langside Cottage which is in the Country outside of Dalkeith. It was a lovely place.

You came up a grade from Dalkeith with a Forest on the right hand side and Farmers Fields on the left s
ide, and at the corner was a rise of ground where I used to lie and dream about what I would do when I grew up.

My imagination would run wild, not thinking I would go to Canada since I didn’t know there was such a place.

On Saturday and Sunday the Poachers would come out with their Hounds to chase the Rabbits providing the Gamekeeper was not around. If the Gamekeeper appeared, they would chain up their dogs, and the Gamekeeper had no proof they were Poaching.

They would say they were exercising their dogs.

The Land belonged to the Duke of Buccleuch and the Farmers were mostly Tenant Farmers.

Behind one of the Fields was a small Pond where we kids used to swim in the nude.

I can remember very vividly while the older people had dinner in the Cottage, Fred and I stayed in the yard and sat on a little bench. They gave us our meal which was half an egg each and Fred said to me in disgust, “Half an egg.”

I said, “You got the best of it, you got the bottom half which is round and larger and I got the top which was very pointed.”
Mother left us and admonished us to be good boys and that she would come frequently to see us, which she did.

It must have been that trip seeing the Forth Bridge that made me decide to be an Engineer and build Bridges and Canals, etc. I was told that painting the Bridge was a continuous process, that when they finished one end they started to paint again. I could believe it, because it was such a huge structure. 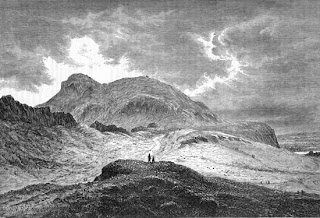 Mother, one Easter, dyed eggs and took us to Arthur’s Seat (at left- Ed) which at that time had a lovely Pond and Lawns.

When I visited Arthur’s Seat during the First War it was a terrible mess.

The Reids had two sons, Tom and Jim; and a daughter, Alice. They had a special Rose Garden for their daughter while the men stayed in the Horse Yard, which was a huge size, along with a Vegetable Garden.

Their son, Jim, was a few years older than us and he was a card, always up to some mischief. He was through the Village School and did all the work around the Cottage, which was a big job, looking after the horses and gardens. He was the last child and was spoilt.

Mr. Reid Senior was a Miner Official at a mine a few miles away.

When Mr. & Mrs. Reid went to Dalkeith or other nearby towns in their single Horse Cart they would take Fred and I and buy us a Treat of Gingerbread Cake and a Lucky Bag, which contained a toy and miscellaneous candies, or a Licorice Strap, that was in strips that we could peel apart and chew.

I remember one occasion when we were left at home under Jim’s authority and Jim said, “Let us make some Potato Stoffers.” But we didn’t have any potatoes and of course, we could not use Mrs. Reid’s Spuds or we would get found out. You know how frugal Scots are like.

Jim said, ” Get out your little cart and get some out of the Farmer’s Field next to the Cottage.”

The Scottish Farmers in this district rotated their Crops and the potatoes in this field had been harvested and were stored in the field.

The way they stored them was to dig a huge ditch a couple of feet deep in the ground, line it with straw and then pile in the potatoes below and above the ground and cover them with straw sheaves.

Fred and I went out and filled our barrow with the potatoes and I got up on the straw Potato Hut to see if anyone was coming before we went on the road home.

The road had a little bend, and coming along who should it be but the Village Policeman from the Town of our Village School.

It happened that I was pulling the cart and Fred spread himself so the Policeman would not see the Potatoes.

We laughed with him and said good-bye when we pulled into Reids’ Yard. We were scared. No doubt the Policeman knew what we were up to.

Jim told us the Reids had been told to help themselves when they wanted Turnips or Potatoes, etc., as they did favours for the Farmer such as caretakers.

It was a great relief as we thought Fred and I would go to Prison for Life but that was Jim delighted to give us a scare.

Jim made the Stoffers and they tasted lovely and we cleaned up everything so Mr. & Mrs. Reid would not know, but they were suspicious because the three of us couldn’t eat our evening meal.

They were great people and understood the pranks of boys and closed their eyes to the little tricks of us boys.

Permanent link to this article: https://edwardwillett.com/2008/12/the-first-world-war-memoirs-of-sampson-j-goodfellow-part-29-flashback-boyhood-days/