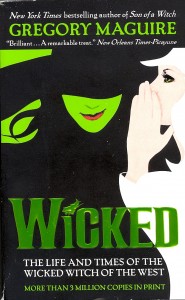 Yeah, I know. Of all the superfluous book reviews in the world, another one of Wicked is probably the superfluousmost.  After all, it’s  a New York Times bestseller, with more than three million copies in print. USA Today called it “an outstanding work of imagination.” John Updike called it an “amazing novel.” The Los Angeles Times called it “A staggering feat of wordcraft.”

We should have just read a synopsis.

The faults we found are numerous. If the goal was to somehow make the Wicked Witch of the West sympathetic, it failed. She almost reached that point fairly early on, as a student at Shiz. As the book wore–and “wore” is absolutely the right word for what became, by the end, a tedious chore to read–her motivations made less and less sense until, at the denoument, she seems to have simply lost her mind for no reason except that the author had no other way of making things match up with the events of the original Wizard of Oz. She was almost completely passive throughout, far more of a victim than an active character, making very few choices of her own, acted on by forces beyond her control. Maybe that’s supposed to be more “realistic,” but it’s also boring, annoying, and ultimately unsatisfying. Throughout I felt the controlling hand of the author-as-puppeteer, making people do things simply because there were things that had to be done, not because it made much sense for them to do them.

And ultimately, I felt a kind of anger at Maguire for building a career that apparently consists primarily of taking the work of others and trashing it for his own purposes. Oh, I know, he’s “re-imagining it for our times.”

And that much-vaunted “wordcraft”? Also overrated, in my opinion. At times Maguire’s attempts to set his prose soaring were downright laughable, at others well-nigh incomprehensible.

In the right hands–an accomplished fantasy writer, perhaps–a retelling of the life of the Wicked Witch of the West might well have been something special. But this retelling, the one we’re saddled with now, the one that has inexplicably become so popular, is nothing special at all. If you love the original Wizard of Oz, don’t read this book. If you enjoyed the musical, don’t read this book. Only read it if you’re so curious as to what the fuss is about that you absolutely must know for yourself why everyone raves about it…and don’t mind being potentially horribly disappointed.

Not recommended by me or my wife..though we’re apparently a minority of two.

We can live with that.

Permanent link to this article: https://edwardwillett.com/2009/04/book-review-wicked-by-gregory-maguire/