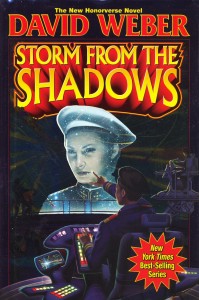 I first discovered David Weber’s Honor Harrington series rather late, reading the first few installments in ebook form on my hieBook reader when they were made available for downloading at the Baen Free Library.

I loved them, and moved on to buy the next few in paperback. Now I am fully addicted and purchase them in hardcover the moment they appear. Which is how I came to read Storm from the Shadows.

Once again, I devoured it–but I have to say, if you aren’t already a fan of the “Honorverse,” you’d probably find the appeal hard to fathom. Weber tends to advance the plot through scene after scene of what, on television, would be called talking heads. People are forever getting together over (usually lovingly detailed) cups of coffee or other beverages and discussing things. In the process, of course, they’re telling the reader what’s going on, but still. For a purportedly action-packed series, there’s a high preponderance of conversation in wardrooms and boardrooms and restaurants and the like.

However, the action, when it does take place, is well done, fast and furious, and you never know for certain who will live or die once it kicks in–even long-established characters have been known to go out in a blaze of glory.

Weber has carefully crafted a future tech that makes battles between starships plausibly mimic battles between sailing ships of old, with “ships of the wall”, long-distance bombardments, and the like (though the similarities are waning as technology advances). Of course, he also spends pages and pages describing that technology in sometimes excruciating detail. I enjoy that sort of thing myself, but I suspect it’s not everyone’s cup of tea.

I’m also noticing, this far into the series, certain phrases Weber overuses in describing his space battles. Ships are always “leaping in agony,” battle-steel is always buckling or shattering, etc. Unavoidable after so many books, and not really annoying…but noticeable.

Oh, the plot? Well, there’s not much point in delving into that, except to say that Honor herself is peripheral to this story, which focuses on Michelle “Mike” Henke, Honor’s best friend, and events that take place in parallel to what seemed much more important events in the last Honor Harrington book–but which, we realize as the book progresses, are in fact about to unleash all kinds of mayhem in future books.

Yes, I enjoyed this latest outing, though it’s almost a placeholder of a novel, a kind of novel-as-lever intended to force, with a sometimes audible grinding noise, the huge mass of the series into a new direction. But I suspect I’ll enjoy the next book more as the new threat introduced in Storm from the Shadows knocks everything in the Honorverse akimbo.

So: read it if you’re already a fan of the series. If you’re not, don’t start here. Go back to the very beginning.  On Basilisk Station and The Honor of the Queen are both still available for free in ebook form. But be warned: they’re habit-forming, and soon enough, like me, you may be hooked on the hard(cover) stuff.

Permanent link to this article: https://edwardwillett.com/2009/04/book-review-storm-from-the-shadows-by-david-weber/