The first sentences I wrote yesterday… 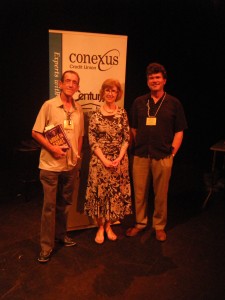 So, on Saturday I returned to Moose Jaw, this time with my lovely wife and daughter, for the final two days of the Festival of Words. My big event was at 4 p.m. in the Mae Wilson Theatre of the Moose Jaw Cultural Centre, a beautifully restored 430-s
eatVaudeville-era theatre. There I conducted an on-stage interview with one of the headliners of the festival this year, best-selling author Jack Whyte (that’s me and him and a representative of the sponsor at left).

Whyte proved to be a natural raconteur and therefore easy to interview. I had a chance before hand to go over my line of questioning, and he said we probably wouldn’t get to half of the questions I’d outlined. Sure enough, the available 35 minutes or so swooshed by, he read for a few minutes (a scene from the upcoming third and final book in his Knights Templar trilogy), and that was that.

Afterward I heard from several people in the audience that they’d enjoyed my interviewing as well as Jack’s very entertaining replies, so it was a success all around. The theatre wasn’t full, but there was a good-sized crowd and I think they went away happy.

Jack’s memoir, 40 Years in Canada, proved to be a Godsend; several of the questions I asked were based on what I had read in that book just that morning, after buying it at the Festival on Friday.

Afterward I made sure to get my copies of Jack’s books signed, and then he bought a copy of Marseguro from me, so win-win all the way around.

I wish I could provide more details about the interview itself, but of course I was in no position to take notes, and for some reason the Festival does not record its sessions. So I guess you had to

be there. Or read his memoir, which will certainly give you the tenor of what he had to say. 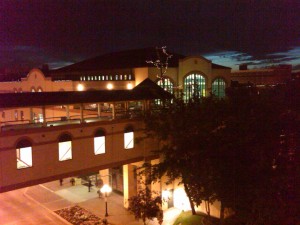 Last night we took it easy at the Temple Gardens Mineral Spa (that’s the view of it from our room at right), where the Festival put me up. While my wife and daughter enjoyed the hot mineral water, I took the opportunity to bang out another 1,200 words or so of Magebane, which I finally feel is back on track. 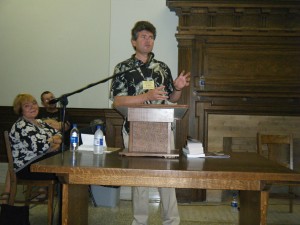 Then this morning I had my second reading, this time alongside mystery writer Gail Bowen (that’s the third photo). I read a different bit of Terra Insegura, and it seemed to go well.

And that was that. There was a wind-up luncheon, but although I had a pass to it, my wife and daughter needed tickets which weren’t to be had, so instead of going to the lunch, we poked around the Moose Jaw Museum and Art Gallery, took a walk through the park, visited the playground, then finally went for lunch at a downtown coffeehouse, bought some ice cream, and headed for home. 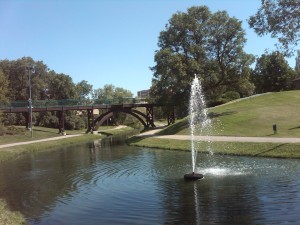 In a way I wasn’t very plugged into the Festival of Words, being focused mainly on my own presentations and not attending any others. Another time, maybe I’ll take in more. But I had a great time, and really enjoyed interviewing Jack Whyte in particular. The Festival of Words is truly a fabulous Saskatchewan event, and if you have any interest in writing or writers, it’s well worth a visit.

As is Moose Jaw itself, of course. That’s a bit of lovely Crescent Park to finish off with.

Permanent link to this article: https://edwardwillett.com/2009/07/festival-of-words-wrap-up/