A half-billion years of irritation

My speech to the Saskatchewan Land Surveyors Association AGM

A writing update: one book launches, one moves toward publication, one waits in the wings 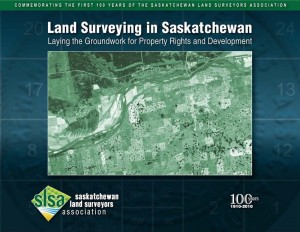 It’s been a busy week, writing-wise. My latest adult nonfiction book, with the admittedly not-very-sexy title of Land Surveying in Saskatchewan: Laying the Groundwork for Property Rights and Development, has now been released by the Saskatchewan Land Surveyor’s Association. The release coincides with the SLSA’s annual general meeting (at which I’ll be making a speech tomorrow for the Past President’s Luncheon), and the launch was held at Government House with the Lieutenant-Governor of Saskatchewan, the Hon. Dr. Gordon Barnhart, in attendance. Dr. Barnhart gave a very nice speech, there were a few other remarks, and then I helped unveil a giant poster showing off the cover of the book.

I expect to be signing lots of copies of the book tomorrow, and I’m also very pleased that a copy has gone out to every high school library in the province. You can check out the first chapter online here.

But wait, that’s not the only writing news from me this week! My other big task over the past while has been editorial revisions for my new YA fantasy novel, Song of the Sword, Book 1 in The Shards of Excalibur, coming out this fall from Lobster Press. It’s been an interesting process–much more of a line-by-line edit than what I do with Sheila Gilbert at DAW. I finished the final section today and it’s already going into layout. I expect to see cover art soon and ARCs. I’m very pleased with the book and looking forward to continuing the story I’ve sketched out for the remaining four books in the series.

Oh, and I’m very pleased that the cover artist is going to be Allen Douglas; check out his work here and you’ll see why!

Now I’ll be returning to Blue Fire, my other YA novel, which isn’t sold but at least has an editor interested in looking at it once it’s completed. And you know what that means: starting next week, the return of The First Sentence I Wrote Today!

Finally, an update arrived this week on Magebane, the first Lee Arthur Chane fantasy novel. It looks like I won’t be getting editorial comments on that on until I see Sheila at KeyCon in Winnipeg in May (where she’s editor Guest of Honour). Currently it’s not slated for publication until August of 2011, though it could move up a bit.

Permanent link to this article: https://edwardwillett.com/2010/03/a-writing-update-one-book-launches-one-moves-toward-publication-one-waits-in-the-wings/