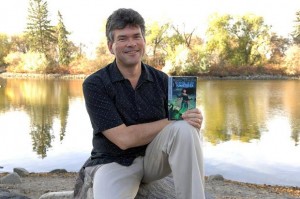 There was a nice feature about Song of the Sword (and me) in the Regina LeaderPost on Saturday. The accompanying photo (at left: it was posted online on Global TV’s Your Saskatchewan site, though with a hilariously wrong caption) was taken on the shore of Wascana Lake with Willow Island in the background: this is the exact spot where, in the book, the Lady of the Lake makes her appearance to my young heroine).

The story, by Tim Switzer, begins:

Looking out over Wascana Lake on foggy mornings in Regina, Edward Willett loved the thought that anything could be hidden in the mist.

So when he came up with the idea of a young-adult urban fantasy novel that would involve the Lady of the Lake and other Arthurian characters, Regina seemed like the logical setting.

“I’ve always tried to sneak a little Saskatchewan into my books when I could,” said Willett, whose first novel, Soulworm, was set in Weyburn. “That’s always been in the back of my mind. You see a lot of fantasy stories set in exotic locations, but to somebody in Italy, Regina is exotic. So why not set it here?”

Permanent link to this article: https://edwardwillett.com/2010/10/leader-post-features-song-of-the-sword/