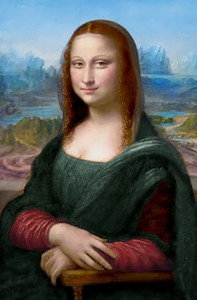 Whenever you visit an art museum that houses really old paintings, you may find yourself underwhelmed by their appearance. Case in point: the Mona Lisa. Although I haven’t seen it recently, when I did see it, back in the 1980s…well. It was small, dark, and hard to see inside its climate-controlled compartment.

That darkness dimming the famous smile dims many other old paintings. Over five centuries, the Mona Lisa has been plastered with layer upon layer of resin, lacquer and varnish that have darkened with age. Removing them has always been tricky, because each substance requires a different solvent, which in turn must not damage the paint that lies underneath everything.

Varnish isn’t the only problem, either. Before electric light, paintings hung in halls filled with smoke, from candles, oil lamps and open fires. Cracking paint is another common concern, especially along the edges, where the stretched canvas has relaxed. (Not that canvas is a problem with the Mona Lisa: it’s painted on a poplar panel.)

In recent years, conservators have had a growing arsenal of high-tech tools they can use when they attempt to restore paintings. Infrared spectroscopy or X-ray diffraction can be used to determine the chemical makeup of old varnish and lacquer, making it easier to find the right solvent. Infrared reflectoscopy and X-ray analysis allow conservators to actually look beneath old varnish and layers of paint applied by past restorers to glimpse the artist’s original.

And now there’s a new restoration technology in town, from an unexpected source: NASA.

The U.S. space agency didn’t set out to restore artwork, of course. Its concern was the damage inflicted on satellites by atomic oxygen in the upper reaches of the atmosphere, 300 to 800 kilometers high. Up there, intense ultraviolet radiation splits two-atom oxygen molecules into individual atoms. Atomic oxygen is highly reactive, which causes satellite components to corrode.

While researchers at NASA’s Glenn Research Center were trying to develop methods to prevent that corrosion, they discovered atomic oxygen could very effectively remove layers of soot or other organic material from a surface. Combine that with the fact that it does not react with oxides, which is what most paint pigments are, and you have a powerful new tool for cleaning old paintings.

They first experimented, in 1996, on two paintings that had been damaged in an arson fire at St. Alban’s Church in Cleveland and deemed unsalvageable. The technique was a success (there are striking before and after photos on NASA’s web site).

That encouraged art museums to risk using the technique on more valuable paintings. Atomic oxygen successfully removed a lipstick smudge from the Andy Warhol painting Bathtub, owned by the Carnegie Museum of Art in Pittsburgh, Pennsylvania, a smudge which traditional solvents would have simply caused to soak into the porous pigment beneath. Atomic oxygen was also successfully used to clean a fire-damaged Roy Lichtenstein ink drawing. (NASA gives the alarming statistic that worldwide an average of one collection or gallery suffers fire damage every day, so an effective way of cleaning soot and smoke from paintings—solvents sometimes just make things worse—would be of huge benefit.)

Atomic oxygen reacts with any organic coating, such as smoke or old varnish, producing nothing more than trace amounts of ozone, carbon monoxide and carbon dioxide, while leaving inorganic pigments undisturbed. (And even paintings that contain organic pigments can be cleaned, if the exposure is carefully timed so the removal stops just short of the pigment.)

And it’s not just art work that could benefit: atomic oxygen may also have medical and industrial applications, such as removing biocontaminants from the surfaces of artificial joints prior to surgery.

Art restorers, NASA notes, are a cautious bunch, as befits practitioners of a craft where a single slip could irreparably damage an irreplaceable, centuries-old work of art. But atomic oxygen promises to be a new, effective addition to their toolbox of techniques.

Just don’t expect it to be applied to the Mona Lisa any time soon: nobody is going to touch that painting until absolutely certain the restoration will not harm it in any way. The closest we’ve come to restoring it is a digital restoration, a computer-generated informed guess of the painting’s original vivid color and detail. (That’s it at the top of this column.)

That’s probably as close as we’ll ever get, probably much to the relief of art restorers. As Jean-Gabriel Goulinat, who worked on the Mona Lisa off and on for more than 30 years (several age spots were removed in the 1950s), once said, “If you want a restoration expert to commit suicide, put him to work on the Mona Lisa.”

Permanent link to this article: https://edwardwillett.com/2011/02/atomic-oxygen-art-restoration/