I’m going to be the Regina Public Library’s writer-in-residence! 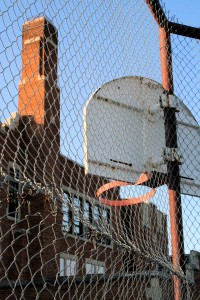 Basketball skills ought to run in my blood. My father won multiple provincial high school basketball championships as coach of the Western Christian College Mustangs, and my brother was both a good player and championship-winning coach himself.

But, alas, basketball and I never got along very well. I could sort of dribble (if I didn’t also try to run) and sort of shoot (as long as nobody rushed me) but it was apparent early on that if there is a genetic component to being good at basketball, I was stuck in the shallow end of the gene pool.

Still, even if I can’t play basketball, I can uphold a bit of the family honor by writing about it: which is why a story this week about basketball shots caught my eye.

Dunks are an exciting part of the game (we even have an expression, “It’s a slam dunk!”, that describes something that’s pretty much an absolute certainty) and so are shots that get “nothing but net,” not even touching the rim as they swoosh through.

In fact, those shots excite fans so much that, not surprisingly, they’re what a lot of players focus on. But new research shows that that’s a mistake, if your goal is actually to win games more than garner applause: from certain spots on the court, the lowly bank shot, which bounces off of the backboard into the net, is definitely the way to go.

That’s the conclusion of a study in the Journal of Quantitative Analysis in Sports led by Larry Silverberg, a mechanical and aerospace engineering professor at North Carolina State University in Raleigh, N.C.

Silverberg was inspired to study the question of bank shots by Larry Hunter, now coach of men’s basketball at Western Carolina University in Cullowhee, N.C., but assistant coach at North Carolina State from 2001 to 2005. Hunter believes that the art of the bank shot is being lost with the current style of play.

Silverberg plays basketball recreationally, and is himself a fan of the bank shot, which isn’t surprising: few recreational players can dunk the ball like top college and professional athletes can. He’s even more of a fan now that his study has shown that from certain areas of the court, players are more likely to score with a bank shot than if they aim straight at the hoop.

In earlier research, Silverberg’s group devised a computer program that simulates the release of a shot, the flight of the basketball, and what happens when it encounters the backboard and the rim. For this study, they used that program to evaluate the best release speeds and launch angles from more than 100 locations on the court that were all less than 15 feet (the distance of a free throw) from the hoop. It was a daunting task: it took months of processing for the program to analyze the millions of possible trajectories involved.

The researchers assumed a hypothetical player who released a standard men’s basketball from a height of seven feet. To make him a little more human, they built in an aiming error equivalent to someone who has a 70-percent success rate at free throws.

They then compared the results their computer-generated player got when aiming directly at the hoop with his results when he aimed at the ideal spot on the backboard to determine which kind of shot works best from various places on the court.

The best spots for bank shots turned out to be off to the sides, but not so close to the end of the court that the shooters can’t get a good angle on the backboard, and a small area a few feet in front of the free-throw line.

The increase in scoring using bank shots from those areas? As much as twenty percent, a huge difference in a game where evenly matched teams often battle to the final buzzer.

Silverberg didn’t just figure out where players were better off using bank shots: he also identified exactly where the best spots on the backboard are for players to aim at from different places on the court.

The best aiming spot turns out to depend on the angle between the baseline (the end of the court) and a line running from the basket to the shooter: the distance to the basket doesn’t change it. It also turned out that the sweet spots on the backboard bear no relationship to the square that’s painted there. Instead, they form a V above the basket. Silverberg has worked out the right size for a V that can be taped onto glass, and where to place a vertical rod a few inches behind the middle of the backboard. To find the perfect spot, a shooter aims at the point where the V and the vertical rod cross.

It’s a simple tool that smart coaches everywhere could adopt to allow players to practice their bank shots: smart coaches like my Dad.

I just wish I could still tell him about it.

Permanent link to this article: https://edwardwillett.com/2011/03/basketball-bank-shots/