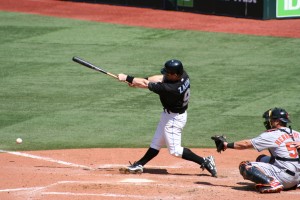 Scientists, like people in general, tend to like sports. Maybe that’s why “science of sports” studies pop up, rather like fly balls, at regular intervals: a metaphor that’s particularly apt when the study involves baseball…like the one I’m about to describe.

Authored by Alan Nathan of the University of Illinois, Lloyd Smith and Warren Faber of Washington State University, and Daniel Russell of Kettering University in Flint, Mich., “Corked bats, juiced balls, and humidors: The physics of cheating in baseball,” just appeared in the journal of the American Association of Physics Teachers.

The researchers set out to investigate, from a physics perspective, three “questions of relevance to Major League Baseball”: “Can a baseball be hit further with a corked bat?” “Is there evidence that the baseball is more lively today than in earlier years?”, and “Can storing baseballs in a temperature- or humidity-controlled environment significantly affect home-run production?” Their experiments took place in the bat-ball test facility at the Sports Science Laboratory at Washington State University.

The first question under consideration was whether a baseball can be hit farther with a corked bat. The researchers note that in 2003 Sammy Sosa of the Chicago Cubs was caught using an illegally corked bat: a wooden bat that has been drilled out lengthwise and filled with a lightweight inert material.

The theory behind corking is that, because the bat is lighter, players can swing it faster and therefore hit the ball farther. But the counter-argument is that a lighter-weight bat imparts less energy to the ball on impact. So…does a corked bat work?

To find out, the researchers fired a baseball from an air cannon at 110 mph onto a solid wooden bat, then on the same bat with a hollow interior, and then with the interior filled with cork. (They’d intended to try the experiment with the bat filled with superball material, too, but the bat broke.)

What about the swing speed? The effect of swinging a lighter bat faster versus a heavier bat slower, when both have the same COR, can be calculated mathematically, and the calculations were clear: the higher swing speed wouldn’t do the batter any good. In fact, a corked bat will usually hit the ball a shorter distance, not a longer one. The only advantage that a corked bat might give is allowing the batter to react faster.

The next question was whether today’s baseballs are livelier than those of the past, a question that pops up (rather like an overworked metaphor) whenever there’s a spate of home runs.

By good fortune finding several unopened boxes of baseballs from the late 1970s, the researchers were able to compare 35-year-old balls to modern ones, firing both against both flat surfaces and bats at speeds ranging from 60 to 125 mph. Again, they found no significant difference between the old balls and the new balls (although of course that says nothing about balls from even older eras, as the researchers are the first to admit).

Finally, the researchers set out to see if the Colorado Rockies’ practice of storing their baseballs in a humidor with a constant temperature of 70 degrees and a constant relative humidity of 50 percent, to counteract the effect of the lower air density in Denver, could account for the decrease in offensive statistics at Coors Field since 2002.

Sure enough, they found that the COR fell by 4.5 percent when the relative humidity at which the ball was stored increased from 30 to 50 percent. They estimate in an actual game the humidified balls would fly 14 feet less on average than regular ones, which could cut home runs by a quarter.

They also found you could cut home runs even more with cold baseballs: the COR fell by 3.3 percent when the storage temperature was decreased from 70 to 35 degrees F, translating to an average 10-foot reduction in flight distance, and a 19-percent reduction in home runs.

So the answers to the three questions? No, no and yes, respectively.

(The photo: Toronto at bat against Baltimore, in Toronto, summer 2008.)

Permanent link to this article: https://edwardwillett.com/2011/06/corked-bats-juiced-balls-and-humidors/