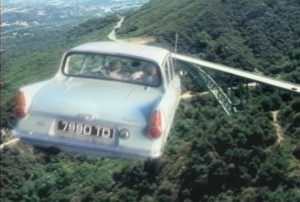 The problem has been that we really only have a few ways to get ourselves into the air, and none of them really lend themselves well to flying cars.

But a new technology presented at the Paris Air Show proffers the possibility of, not only flying cars, but more stable, easy-to-fly and mechanically robust aircraft for a plethora of purposes: the first “disruptive technology”—technology that changes everything and seriously shakes up an industry or market—in aviation since the jet engine.

The brainchild of the Austrian research company IAT21, the D-Dalus (a play on Daedalus from Greek mythology, which you have to admit is a much better choice than Icarus) is neither a fixed-wing nor a rotor aircraft. Instead, it is propelled by four mechanically linked contra-rotating cylindrical turbines, all spinning at 2,200 rpm.

Servos can turn the blades through a full 360 degrees around all three axes. That allows the D-Dalus to launch vertically, hover perfectly still, and move in any direction, a complex process made simple by computers: all the operator has to do is manipulate a simple joystick. That means the D-Dalus is far simpler to fly than any helicopter. (That’s not the only way it’s simple: it’s also simple mechanically, so simple that it requires little maintenance and what little is required can be done by someone with no more mechanical expertise than your average auto mechanic.)

Speaking of helicopters, they and all our other existing VTOL (vertical takeoff and landing) aircraft are challenged by bad weather and flying long ranges. They’re also hard to land on moving platforms, such as boats in rough water.

But D-Dalus, according to its developers, suffers from none of these problems. Its ability to thrust upward allows it to “glue down” as it lands, even on a moving vehicle or tossing boat. It’s extremely stable, handling rough weather with ease.

That stability, combined with a built-in sense-and-avoid system to keep it from running into things, and the fact it has no vulnerable external parts (unlike a helicopter, for example) means the D-Dalus can hover very close to cliff faces and building walls (making it potentially very useful for search and rescue missions).

The lack of external moving parts also gives the D-Dalus 360-degree vision: no blind spots in any direction. Throw all of these capabilities into the pot, along with the fact it’s nearly silent, and it’s not surprising the military is interested in it for surveillance drones.

But there are many other potential uses. The D-Dalus is so stable, it could even be flown safely into a building through an open window. Once inside, it could be used to remove explosives or contaminants, extract injured people, or even hold and direct water hoses for fire fighters.

D-Dalus aircraft can lift heavy loads, and the bigger they are the more efficient at lifting they become, which means they could be used as skycranes for loading and unloading ships when regular cranes aren’t available. The current D-Dalus has a 120 bhp engine, rotors five feet long, and can lift up to 70 kg, but IAT21 is working with Cranfield University in the U.K. on a version with a larger, more powerful engine, a new hull shape, and advanced guidance and control systems.

Every new technology runs into challenges. In the case of the D-Dalus, in early testing, all available bearings failed due to the huge forces on the blade pivots. In response, Austrian inventor Meinhard Schwaiger (who already has 150 patents to his name) created (and, of course, patented) a new, near-frictionless swivel-bearing.

You’ll notice there’s no mention in any of this of a passenger-carrying version: but there’s no reason one couldn’t eventually be developed, “for public transit,” as the news story I read put it.

“Public transit” conjures up images of airliners, or maybe airbuses, but really, we all know what it really means.

And once we have them, the future really will be here…at last.

Permanent link to this article: https://edwardwillett.com/2011/06/d-dalus-dawn-of-the-flying-car/