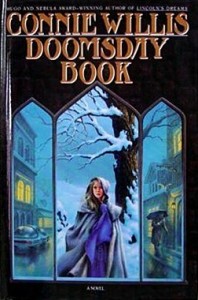 At this year’s World Science Fiction Convention, in Reno, Nevada, the Hugo Award for best science fiction novel of the year went to Connie Willis for Blackout/All Clear (Spectra Books), in which historians from the future, researching the London Blitz, find themselves trapped in it.

Willis’s time-travelling historians have featured in previous books, notably Doomsday Book., where the focus of the research is the Black Death. Willis’s depiction of its horrifying human toll of the Black Death has stuck with me for years.

Erupting in 1347 in China, the Black Death spread through the Middle East to Europe, where it killed 50 million people—one third of the population.

I’ve always thought “everyone knows” that the Black Death was a version of bubonic plague. But as is often the case in science, not everyone believes what everyone knows.

Bubonic plague is caused by a bacterium called Yersinia pestis, and analysis of ancient DNA (aDNA) has certainly revealed Y. pestis in plague victims from the Black Death in the past.

Nevertheless, discrepancies between the symptoms of the Black Death and those of more recent outbreaks of plague, plus the difficulty of accurately analyzing ancient remains for the presence of Y. pestis, have led some to suggest that perhaps the Black Death was caused by something else entirely: that it could have been a hemorrhagic fever, a la Ebola, or even something completely unknown.

In 2010 a team of anthropologists from Johannes Gutenberg University in Mainz, Germany, analyzed dental pulp or bone samples from 76 human skeletons excavated from “plague pits” in England, France, Germany, Italy and the Netherlands, and claimed to “unambiguously” show  that Y. pestis did indeed cause the Black Death.

They went looking through the ancient DNA for traces of Y. pestis, and found a Y. pestis-specific gene in 10 specimens from France, England and the Netherlands. They didn’t find it in the specimens from Italy and Germany, but they had another weapon in their scientific arsenal called immunochromatography which revealed the bacteria’s presence.

A more detailed analysis revealed that, rather than belonging to one of the two known strains of Y. Pestis, dubbed “orientalis” and “medievalis,” their samples belonged to different, older forms.

Of those two, one type appeared to have similarities with types recently isolated in Asia, while another, they said, probably no longer exists today.

Some scientists remained skeptical…but at least some of those skeptics have now been convinced by a brand-new study by researchers from Canada’s own McMaster University.

Hendrik Poinar, an evolutionary geneticist and member of McMaster University’s Michael G. DeGroote Institute for Infectious Disease Research, graduate student Kirsti Bos, and collaborator Johannes Krause of the University of Tubingen studied the DNA of 109 human skeletons buried in 1349 at East Smithfield, a mass grave site for London victims of the Black Death, and another 10 buried at St. Nicholas Shambles, a site that pre-dates the Black Death.

They used a clever new technique: with DNA from a modern strain of the plague, they made a molecular “probe” that would bind to DNA from Y. pestis. Then they attached a magnetic chip to the probe, which allowed them to use a magnet to later retrieve the probes from the bone samples.

They found that the samples from East Smithfield did indeed contain bacterial DNA belonging to a strain of Y. pestis—and, indeed, a strain that doesn’t exist today. Nor was it present in teeth from the skeletons buried in the Shambles, prior to the Black Death.

Two members of the team had previously argued that Y. pestis was not the cause of the Black Death: this evidence convinced them.  It also convinced Tom Gilbert at the University of Copenhagen, another skeptic of previous research. “What makes this work stand out is its very clever approach,” he says.

Gilbert and Poinar alike believe that this technique may allow scientists to uncover the full genetic sequence of the strain of Y. pestis that caused the Black Death, explaining why it was so virulent, how it evolved…and helping scientists predict if any similarly devastating strain might appear in the future. It could also help researchers uncover the secrets of other ancient pathogens.

But the best news of all is that the Black Death bacterium appears to be extinct.

Permanent link to this article: https://edwardwillett.com/2011/08/the-black-death/