Saturday Special From the Vaults: There’s A Puppy in My Pocket

Saturday Special from the Vaults: Dragons over Europe

The Holy Grail of hemophilia treatment 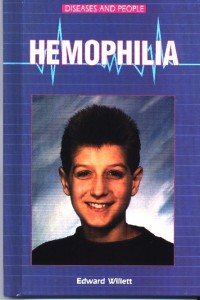 Over more than two decades of science writing, I’ve seen a lot of my past writings rendered obsolete by scientific progress.

Case in point: the release last week of a research report on exciting new progress in gene therapy for hemophiliacs.

Back in 2001, I wrote a book on hemophilia for the Enslow Publishers series Diseases and People (<brag>School Library Journal called it: “An excellent resource for basic research for personal or academic use.”</brag>).

Gene therapy—the insertion of genes into living cells in the human body to treat disorders—has always seemed to hold particular promise for the treatment of hemophilia because it is a genetic disease: you can’t catch it, you can only inherit it.

What is hemophilia? Allow me to quote my own book:

“Hemophilia is a disease in which a person’s blood does not clot properly. People with hemophilia do not produce enough of one of several proteins in the blood called clotting factors.  The body needs these factors to stop bleeding after an injury. Without these factors, bleeding lasts longer than it would otherwise…

“Hemophilia affects males almost exclusively. About one in 5,000 boy babies has hemophilia. It is passed on from generation to generation by women who may or may not show bleeding-related symptoms themselves. In about one third of the cases, there is no family history of hemophilia…

“The primary symptoms of hemophilia are abnormal bruising and bleeding. In toddlers, falls and bumps may cause skin bruises and bleeding from the lips and tongue. In older children and adults, bleeding may involve muscles and joints, producing painful swelling and hindering movement. If early treatment is not given, this bleeding can result in permanent joint damage.  Head injuries are particularly dangerous for hemophiliacs…bleeding into the brain can be fatal. Bleeding may also occur in the face, neck, or throat, obstructing breathing. Bleeding from the mouth, gums, and the nose may be troublesome, as well…

“The standard treatment in the event of bleeding is to inject the hemophiliac with the missing blood clotting factor, made from either donated plasma or by using recombinant gene technology. This can be done on a regular preventative basis, usually three times a week, just before undertaking an activity that could cause bleeding, or as needed to treat episodes of bleeding…

Hemophilia is, in short, a nasty condition indeed. Prior to the First World War, the average lifespan for a boy with hemophilia was 11. Prior to 1968, it was only 20. By 1983 it was 64…but during the 1980s it dropped again due to the impact of AIDS, which hemophiliacs contracted through the injection of blood clotting factor made from donated, infected plasma (young Ryan White, who graces the cover of my book, was one of the most high-profile victims).

Since 1999, the average lifespan has been normal, but treatment still involves regular injections of clotting factors.

The only way to cure hemophilia would be to replace the missing genes that code for the production of clotting factors…and that’s precisely what researchers from the University College London Cancer Institute and the St. Jude Children’s Research Hospital in Memphis have just reported success with.

Their technique used a modified adeno-associated virus, or AAV (which infects human cells but doesn’t cause disease) to insert the gene which produces clotting factor IX (FIX), into liver cells. Their test subjects were six people with severe Hemophilia B. (About one in five people with hemophilia have Hemophilia B; the more common Hemophilia A, which involves a different clotting factor, offers a more complex target for gene therapy, so much of the research has focused on Hemophilia B.)

Before the therapy, the six patients all produced FIX at less than one percent of normal levels. After the therapy, each produced FIX at between two and 11 percent of normal. In the short-term follow-up of six to 16 months, four of the participants no longer needed infusions of FIX at all, while the other two required them less frequently than before.

Molecular Therapy magazine, reporting on preliminary results of the study back in March, enthused that it represented nothing less than the “holy grail” of hemophilia gene therapy.

It also renders my 10-year-old book out-of-date. But you know what? After researching all the tragedy and suffering hemophilia has caused down through the years, I’m okay with that.

I just hope all the other books I wrote, on Alzheimer’s disease, arthritis, meningitis and Ebola, are also rendered obsolete—the sooner, the better.

Permanent link to this article: https://edwardwillett.com/2011/12/the-holy-grail-of-hemophilia-treatment/