Saturday Special from the Vaults: A Speech by T. Walter Scott, First Premier of Saskatchewan, on the Occasion of SUMA’s 2005 Convention

A few years ago, at the time of Saskatchewan’s centennial celebrations in 2005, I had the opportunity to thrice portray T. Walter Scott, first premier of the province of Saskatchewan, and give a speech in his guise. Naturally, I made him a time traveler, so I could treat the whole thing a bit like a science fiction story.

Two of the occasions were to mark the centenary of the Hill Companies, intimately involved in the building of the city and province. One of those was here in Regina, the other in Calgary, where I got to poke fun at our neighbouring province in front of an august crowd that included the then-Premier of Alberta, Ralph Klein. So that was cool!

The following version of the speech was given at the 2005 convention of the Saskatchewan Urban Municipalities Association‘s annual convention in Saskatoon. 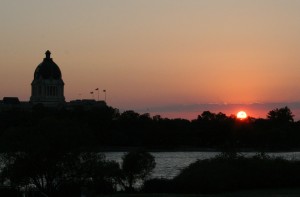 It is a great privilege for me to be here on the occasion of the centennial convention of the Saskatchewan Urban Municipalities Association.  My name is Thomas Walter Scott, and I have–or rather, from your point of view, had–the honor of being the first premier of the province of Saskatchewan.

You will forgive any confusion in tenses, I hope. For you, as I understand it, it is January 29, 2005.  However, when I awoke this morning, it was January 29, 1912.  I therefore bring you greetings, not only from the government of Saskatchewan, but also from what is, to you, the distant past, a time when this great province was not a hundred years old, or even ten years old, but barely six.

Before I enter into the substance of my remarks, I must first express my gratitude to Mr. H. G. Wells, without whose invaluable invention, the Time Machine, I would not have been able to be with you here today.

I confess that, having just arrived moments ago, I have no detailed knowledge of conditions in this Saskatchewan of almost a century in my future; but I have made a few observations already that imbue me with confidence that our glorious province has indeed blossomed into greatness as I have always predicted it would.

I note, for example, that the legendary hospitality of the Saskatchewan people has not changed; for after having left the Time Machine in the street outside this great auditorium in a spot conveniently marked with the image of a wheeled chair–an image which looked remarkably like the time machine itself, and which I therefore took to be an indication I should stop there–I glanced back to see a gentlemen in a blue uniform writing a welcome note and placing it in a prominent place where I could not fail to see it upon my return, a generous action indeed.  I must congratulate the current mayor and city council of Saskatoon for establishing what is obviously a corps of men whose duty it is to issue friendly greetings to newcomers. I certainly look forward to reading his warm welcome when I return to the Time Machine after my address to you, and I trust that those of you representing other municipalities issue similar greetings to newcomers to your towns and cities.

And speaking of the street outside, it was with great pleasure that I noted it was paved, and bordered by concrete curbs and sidewalks. This is a great advance from the province’s early days; our standing joke in 1905 was that when it rains one could pick up enough topsoil to claim a homestead simply by walking down the street of any Saskatchewan city.  As one early resident of the province wrote home to Ontario, “we welcome the winters for the reprieve they offer from the sea of mud we live in the other three months”!

But even in my own time, we have made great strides in improving the roads of our cities.  Indeed, just last year, in the spring of 1911, we inaugurated that most civilized means of transportation, a streetcar system, in Regina.  Though I did not see it in my brief sojourn outside, I am certain that Saskatoon and other Saskatchewan communities must by now also enjoy this modern convenience. No doubt most of you rode these streetcars as you made your way to the convention from your various hotels.

I note that this room is lit most brilliantly by electricity–so brilliantly, indeed, that it is difficult to see anything of any of you from here on the stage–which gives me confidence that all the cities of Saskatchewan must enjoy the benefits of electrical power.

Similarly, I am confident that most residents of Saskatchewan now have access to a telephone.  This is of great concern in my own time.  In the last election, in 1908, our Liberal platform called for increased telephone service, and we have committed ourselves to public ownership of long-distance lines.  However, I am firmly against the public ownership of local telephone companies, or other public utilities.  Government oversight, yes; government control, no. This, of course, contrasts with the well-known Conservative position in my day that all public utilities should be government owned.  Now, I know that the Urban Municipalities of Saskatchewan have called upon my government to place telephones under public ownership.  However, I am sure by your time that concern has long since faded.  I have often said it would be suicidal for any government of Saskatchewan to try to provide a telephone to every rural resident. That is best left to private enterprise; and no doubt the decades have proved me right. No doubt by your time hundreds of local telephone companies across Saskatchewan are providing the handful of telephones needed by the smaller towns,you’re your organization and the Conservatives alike have come around the wisdom of the staunch Liberal belief that government should not assume ownership of ventures that could be handled by cooperative or private enterprise.

You know, when Saskatchewan became a province, just seven years ago for me, and a hundred for you, there were only 60 incorporated villages, ten towns and three cities–and yet, the Union of Saskatchewan Municipalities held its inaugural convention, cementing its reputation as a very forward-looking organization. In fact, it wasn’t until 1908, the year my Liberal government won re-election, that the Legislature passed the acts that set up the current system of cities, towns, villages and rural municipalities, and created the new Department of Municipal Affairs.

No doubt the acts have been amended many times since.  You may find it amusing to know that in those early days, a village could be incorporated as a town with a mere 500 residents, and it took only 5,000 to become a city!  But villages longed to be towns. Among other things, towns could acquire parks and recreation grounds, and establish skating and curling rinks.  (The latter power was insisted upon by the many Scots in the Legislature!)

And in my time, villages are springing up and becoming towns with astonishing speed.  To name just three, Melville, Outlook and Watrous hardly existed in 1907, organized as villages late in 1908, and incorporated as towns in 1909.  No doubt by your day they each contain many thousands of residents and are thriving cities.

And thus, though I have had no opportunity to confirm it, I am confident that today, in twenty-ought-five, Saskatchewan has proved the prediction I have made often:  “Just as rue as the sun shines there will be within this Province alone some day a population running into the tens of millions.”

That being the case, many of you must represent urban municipalities with populations in the hundreds of thousands, or even millions.  Regina alone, I am confident, has long outstripped the great cities of my age–London, New York, Paris–in population, beauty and culture, and though no doubt Saskatoon continues to lag behind Regina in population, even with only half as many people, I am certain it, too, must be a great city, as must Moose Jaw, Prince Albert, and all the rest.

I did my best, as premier, to spread the benefits of province-hood to all our cities. Regina, of course, was made capital and received the Legislative Building; Saskatoon received the University. Prince Albert was given the provincial penitentiary, and North Battleford the mental health hospital.  And Moose Jaw, the second-largest city in the province in 1911, received…um…well…well, no doubt something came up. Later.  After my time?

Perhaps I can share a little bit more about my time, though the political concerns of 1906 may make you laugh in this more sophisticated age.

I am ashamed to say, for example, that there is great concern about corruption in government in 1912.  My promise on becoming premier in 1905 was that I would present to the people of this province good, clean, honest government.  I am confident that the governments I have formed have set just such an example, so that never again have the Saskatchewan people seen politicians sullied by scandal.

In fact, if I may be permitted one partisan note, I am confident that my Liberal government has presented such an example of good government that Liberals continue to govern this province to this very day.

Peace, Progress and Prosperity was my slogan for the 1905 election.  I am certain all three have continued to be the lot of Saskatchewan residents in the years that lie in your past, but are still in my future.  This province’s people have unlimited potential. Already, in my time, your association has played a key role in unlocking that potential.  The fact that I am here helping you celebrate your 100th anniversary is proof to me that you have continued to do so.

And…Mr. Wells told me I shouldn’t tell you this, but…well, I happen to know you will continue to play a vital role in Saskatchewan for decades to come:  you see, I must now bid you farewell, remount the Time Machine, and make my way to my next speaking engagement–the bicentennial convention of the Saskatchewan Urban Muncipalities Association, scheduled for Saturday, January 31, 2105.  Reserve your hotel rooms now!

My congratulations and best wishes once again. Thank you for your kind attention.

(The photo: the Saskatchewan Legislative Building at sunset.)

Permanent link to this article: https://edwardwillett.com/2012/01/saturday-special-from-the-vaults-a-speech-by-t-walter-scott-first-premier-of-saskatchewan-on-the-occasion-of-sumas-2005-convention/