Saturday Special from the Vaults: A Speech by T. Walter Scott, First Premier of Saskatchewan, on the Occasion of SUMA’s 2005 Convention

Saturday Special from the Vaults: Picking the Bones 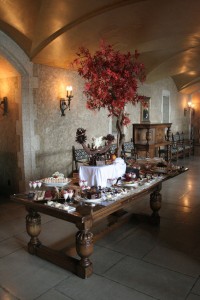 The New Year may already be a little long in the tooth for a column on New Year’s Resolutions, since many of them have already been broken, but, hey, maybe you’re one of those still clinging to the hope that this year will be different than all the rest: in which case, this column’s for you.

The key to keeping a resolution is willpower, obviously. But what is willpower? Is it some mysterious quality that some people have and others don’t? Is it a virtue we can build in ourselves with practice? Is it what separates saints from sinners?

None of the above, say some scientists. According to Roy F. Baumeister, a social psychologist at the University of Florida, willpower is simply a form of mental energy, fueled, like all brain functions, by glucose in the bloodstream. And that means that like any other form of mental energy, it can be used up.

Baumeister, in a 2007 experiment, gave students an attention-taxing task (watching a boring video while ignoring words at the bottom of the screen), then rewarded them with a glass of lemonade. Half got lemonade made with real sugar, while the others got lemonade sweetened with Splenda. They were then given tests of self-control—and the students who had drunk Splenda-sweetened lemonade consistently performed worse. Their willpower was literally unfueled.

Baumeister has co-written a book on the subject, Willpower, with John Tierney, science columnist for the New York Times. He calls this state of mental fatigue “ego depletion,” and there’s really nothing we can do about it: it’s just the way our brains work. So the real key to keeping resolutions, Baumeister and others believe, is, as Jonah Lehrer put it in a recent article for Wired.com, “to recognize the inherent weakness of the will.”

Nothing displays that weakness better than New Year’s resolutions. A 2002 study by John C. Norcross and other psychologists at the University of Scranton found that by the end of January 26 percent of resolvers had broken their resolutions. Half had broken them by March. By July, that had risen to 56 percent. A 2007 survey found that eventually 88 percent of all resolutions end in failure.

Bad statistics perhaps, but there’s actually a flip side. Sure, only 44 percent of those who made resolutions continued to cling to them by July, but only four percent of a control group who had the same goals (i.e., losing weight) had made progress in that same amount of time. Resolutions, in other words, made it ten times more likely people would actually change what they wanted to change.

And despite the odds, some people do succeed at sticking to efforts at self-improvement. How do they do it?

A new study says it’s not by any great feat of willpower, of which they have no more than anyone else. Rather, it’s by application of careful strategy.

In this study, led by Wilhelm Hoffmann at the University of Chicago, 205 participants in Wurtzburg, Germany, received specially designed smartphones. Over a week, they were pinged seven times a day and asked to report whether they were experiencing a strong desire: if so, they were then asked to describe it, how strongly they felt it, and whether it caused an “internal conflict.” If it did cause a conflict, they were asked about their ensuing success at controlling it: did they successfully thwart their desire to, say, eat a whole container of ice cream?

The key finding, though, was that the best way to thwart self-conflicting desires isn’t through the application of weak willpower, but by avoiding temptation in the first place. As Lehrer puts it, “unsuccessful dieters try not to eat the ice cream in their freezer, thus quickly exhausting their limited willpower resources,” whereas “those high in self-control refuse to even walk down the ice cream aisle in the supermarket.”

The latest scientific findings, to be sure: but what it all boils down to for me is an old saying I heard many times growing up: “The spirit is willing, but the flesh is weak.”

If you don’t want to yield to temptation, better to avoid it altogether: and maybe, just maybe, you’ll actually keep your New Year’s resolution.

(The photo: A dessert table at the International Festival of Wine & Food, Banff Springs Hotel.)

Permanent link to this article: https://edwardwillett.com/2012/01/willpower/