Saturday Special from the Vaults: Andy Warhol: Everyone Will Be Famous for 15 Minutes

Saturday Special That’s Not Actually from the Vaults: The Seven-Sentence Story 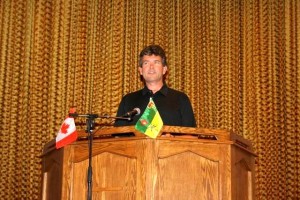 As a writer, freedom of speech is near and dear to my heart. It’s one of the basic principles of the democratic form of government. And yet it seems to be constantly under attack, for one simple reason: it’s easy to say you believe in free speech when people are saying what you agree with. It’s a lot harder when they start saying things you vehemently disagree with.

“He/she/they shouldn’t be allowed to say that!” is perhaps a natural human response, but it’s still one that must be overcome if free speech is to flourish. Which is why I find a recent technological development rather disturbing.

Imagine if, instead of shouting down people who say things we disagree with (as, disturbingly, so many people seem to think is the best way to deal with disagreeable speech, even—especially, it sometimes seems—on university campuses), squelchers-of-free-speech had a gun that could prevent someone from talking.

It sounds bizarre, but that’s exactly what Japanese researchers Koji Tsukada and Zautaka Kurihara believe they have come up with.

They call it the “SpeechJammer,” and it works because, in order to speak properly, we need to hear what we’re saying: we modulate our speech based on this auditory feedback. Singers can sing better when they can hear their own voices over headphones in the recording studio, or over the monitors on-stage: radio personalities, ditto.

But interfere with that auditory feedback by delaying the sounds coming back to our ears by just a tiny bit, and we become discombobulated: it’s thought that the delay actually interferes with our brains’ cognitive processes. And that’s exactly what the SpeechJammer does: it squirts a person’s own words back to them after a delay of 0.2 seconds.

As the researchers put it in their paper, “This effect can disturb people without any physical discomfort, and disappears immediately the speaking stops. Furthermore, this effect does not involve anyone but the speaker.”

The researchers’ prototype SpeechJammer consists of a directional microphone and speaker attached to a box that also holds a laser pointer and a distance sensor (and, of course, a computer, which computes the delay based on the distance to the speaker). To interfere with someone’s speech, you point the SpeechJammer at the person talking, using the laser pointer as a guide, and simply pull the trigger. It can be effective up to 34 metres away.

They found that speech jamming occurred more frequently in the “reading news aloud” context than in the “spontaneous monologue” context, and that it never occurs when meaningless sounds such as “Ahhh” are uttered over a long time period.

Their preliminary study has pointed them toward further research to make their device work better, but the technology seems so simple and straightforward (so straightforward they’re not even attempting to patent it) that it will almost certainly find real-world applications.

Which is where it gets a little creepy. Imagine politicians cut off in mid-speech because someone is jamming them. If you think that sounds grand, you’re not thinking hard enough, because it won’t just be the politicians of the hated other party getting squelched, but the brilliant orators of your own beloved movement.

Or imagine you’re at a meeting where your boss is presenting changes to the workplace you strongly disagree with—but you are unable to voice your concerns because the conference table is equipped with a SpeechJammer at every seat that allows whomever is chairing the meeting to literally control who gets to talk, and for how long.

The world might be quieter. But a lot less free.

Permanent link to this article: https://edwardwillett.com/2012/04/the-speechjammer/