Saturday Special: The First Two Chapters of The Haunted Horn 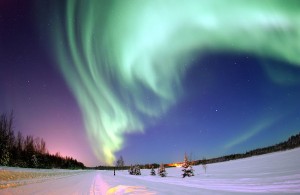 There are few more awe-inspiring sights in the sky than the northern lights. Probably everyone who lives in Saskatchewan has seen them multiple times, and those who live further north are even better acquainted with them…but that doesn’t mean we know everything about them.

What generates it, though, is still a mystery.

But first, a bit of background which might explain why the very notion of auroral sounds seems preposterous to some.

The proper name for the northern lights is aurora borealis. Aurora was the Roman goddess of the dawn, while borealis basically means “north”: down around the South Pole people see aurora australis instead.

From the ground, the most common auroras look like huge, shimmering, ever-shifting curtains of light, extending from east to west. Usually they’re green, although occasionally there’s also some red to them.

They’re even bigger than they look. The bottom of the curtain is about 100 kilometres up, and the upper edge can extend to 300 kilometres or higher–to the very edge of space.

Which is why, as physicist and aurora expert Dirk Lummerzheim, a research professor emeritus at the University of Alaska Fairbanks, puts it, “It is easy to say that the aurora makes no audible sound. The upper atmosphere is too thin to carry sound waves, and the aurora is so far away that it would take a sound wave five minutes to travel from an overhead aurora to the ground.”

From space, auroras don’t look like curtains at all; instead, they’re oval belts of light surrounding the geomagnetic pole. The aurora belt has an average radius of about 20 degrees of latitude (2,200 kilometres), though on rare occasions it spreads out as far as 60 degrees. It extends thousands of kilometers east to west, but it’s usually only about one kilometre thick from north to south.

Auroras are caused by the interaction between the solar wind and the Earth’s magnetic field. The solar wind is the highly energetic particles which the sun sheds constantly, at a rate of about one million tonnes per second. These particles streaming through the Earth’s magnetic field generate electrical charges–energetic electrons that are channeled poleward by the magnetic field. There they collide with particles in the upper atmosphere, exciting them: that is, imparting energy to them which they then shed in the form of light. Solar flares aimed in our direction throw a lot more particles our way, which results in more northern lights during gusty solar weather.

Sounds from intense auroras have been reported for centuries. In his book Germania the Roman historian Cornelius Tacitus (56-120AD), said people from the northern part of Germany claimed to be able to hear a faint swishing, hissing, sighing or rustling from the auroras, and that kind of anecdotal evidence has been around ever since.

Finnish researcher Professor Unto K. Laine of Aalto University’s School of Electrical Engineering, has long had an interest in aurora sounds. In a paper just published in the proceedings of the 19th International Congress on Sound and Vibration, held last week in Vilnius, Lithuania, he reports that he used three separate microphones to successfully record auroral sounds and pinpoint their location: in this instance, only about 70 meters above the ground.

Of course, that still doesn’t answer the question of why there should be any sound at all. It seems clear, however, that whatever the mechanism (or mechanisms; the researchers suspect there may be more than one since the sounds are so varied) behind the sounds are, people aren’t really hearing the distant auroras: rather, they’re hearing something produced much closer to the ground by the same energetic particles from the sun that create the auroras, particles which have penetrated much deeper into the atmosphere.

So next time you’re out in a quiet field, far from any other noise, and the northern lights fill the sky, listen close. You just might hear one of nature’s most mysterious noises.

And if anyone doubts your claim, just point them to this column.

Permanent link to this article: https://edwardwillett.com/2012/07/auroral-sounds/