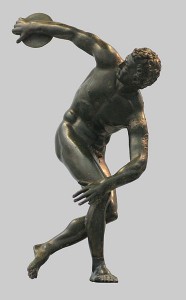 It is customary, in the column-writing biz, to be up-front about any direct personal connection you have to your topic. So, full disclosure: I was a high-school shot-putter. Sad to say, Olympic caliber, I was not.

As I heaved my eight-pound lead ball an embarrassingly short distance in my one-and-only competition, however, I did wonder who on Earth ever came up with the idea of this is a sport.

The same people who brought us haggis, as it turns out: the Scots. At least that’s Lovett’s view: he thinks shot putting has as its ancestor the heaving of large stones in Scottish Highland games, and that the cannonball (the “shot” in shot put) was adopted as a more refined heaving object

The aerodynamics of the shot put are not, alas, all that interesting. Essentially, the shot putter is simply replacing gunpowder with human muscle, launching the shot into a ballistic trajectory…which means the ideal angle for distance is 45 degrees. Shot putters spin around before launching the shot simply to pick up some speed and impart more energy to the throw.

Discus throws, though, are more complicated. The discus is the only other current throwing sport besides shot put that was part of the first Modern Olympics, in 1896: but unlike the shot put, it goes all the way back to the ancient games in Athens (as statues of discus throwers from that era attest).

Lovett’s go-to source for his COSMOS article is Geoffrey Spedding, an aerospace and mechanical engineering professor at the University of Southern California. Spedding describes the discus as a “spin-stabilized oblate spheroid.” That means that the discus is designed so that if it is tilted backward slightly when it is thrown, its passage through the air creates greater air pressure on the bottom/front than on the top/back, generating lift and extending its flight. (The current records stand at over 70 metres for both men and women.) It’s “spin-stabilized” in that its spin gives it angular momentum that: like a bicycle wheel, it resists tipping, which keeps it from dropping edgewise out of the air.

Since the discus flies farther the more lift it generates, atmospheric conditions can affect its flight, Lovett notes. A 1981 paper in the American Journal of Physics found that the discus can travel more than 10 per cent farther in a 10-metres-per-second headwind than in calm air. Cold temperatures, humidity or low elevation, all of which increase atmospheric density, also help discuses fly farther.

Another throwing sport well-known to the Greeks but not a part of the first modern Olympics was the javelin, a.k.a. the spear. Javelins, Lovett notes, fly farther than any other thrown object in the Olympics. The key is the “angle of attack,” the difference between the direction of flight and the upward tilt of the point as the javelin leaves the thrower’s hand. This upward tilt, Spedding says, causes air to flow across the javelin’s curved underside, which increases pressure there while reducing it on the upper side. Just as with the discus, this creates lift and so the javelin rises.

The optimum launch angle is apparently 30 degrees (same as the discus), but the optimum angle for the javelin itself is 37 degrees. Tilt the javelin too far upward at launch and it will stall and fall short, don’t tilt it far enough and it won’t get enough lift.

And finally, there’s the weirdest throwing sport of all, the hammer throw. First of all, it’s clearly not a hammer. It gets its name from another Scottish event: throwing a sledgehammer. (The English liked it, too: King Henry VIII, Lovett notes, was reported quite good at throwing hammers. Also tantrums, but that’s a different story.) But it actually goes back much, much further, to ancient Ireland, 3,500 to 3,800 years ago, where athletes threw weights attached to ropes at the Taileann Games.

Aerodynamically? It’s still a cannon ball: a straightforward ballistic trajectory, meaning a 45-degree launch is optimal. The chain simply allows athletes to spin it much more vigorously than the shot put, imparting a lot more energy that carries it nearly four times as far.

The throwing events are only a few of those at the Olympics, of course, and every event has its own fascinating history…and fascinating physics.

Somehow, I think I already know next week’s column topic.

Permanent link to this article: https://edwardwillett.com/2012/07/olympic-throwing-sports/