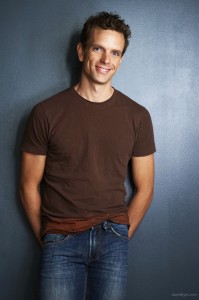 This week’s Saturday Special is the interview I conducted with Paul Nolan, who grew up in the small town of Rouleau, just outside Regina (better known, perhaps, as Dog River from the TV series Corner Gas), and just ended a run on Broadway in the title role of the revival of Jesus Christ Superstar (he’s now starring in a production of the Elton John version of Aida in Kansas City, but JSC was still running when I wrote this story for Fine Lifestyles magazines.)

I performed with Paul many times when he was growing up, and once since, when I was in Persephone Theatre‘s production of Beauty & the Beast in 2007, in which he played the Beast. He’s a tremendous performer and a fabulous singer, and it’s great to see him having such success.

It’s a long, strange journey from small-town hockey player to Broadway musical theatre star, a journey so unlikely it’s probably safe to say Roleau native Paul Nolan is the only one who has ever made it.

But make it he has: the 33-year-old is currently starring as Jesus in the Tony-nominated revival of Andrew Lloyd Webber’s classic rock opera Jesus Christ Superstar in the Neil Simon Theatre in New York City.

He’s garnered rave reviews for it, too. There have been articles in The New York Times, the Wall Street Journal, The New Yorker and Vanity Fair. The Associated Press called him “all-around excellent.” The Globe & Mail wrote, “With his hypnotic performance as Jesus, Paul Nolan remains the show’s superstar.”

And, he says, “It all began with voice lessons.”

From hockey to music

The youngest of five children (he has four older sisters), Nolan grew up in a farming family. Like most prairie boys, his first focus was hockey. “I started playing when I was six. We happened to have a very talented group of guys. Before I left hockey for good at age 17 we had won two provincial championships, and they won another after that.”

But even though he enjoyed hockey and was good at it, it wasn’t until he began voice lessons with Betty Hayes, who introduced him to Regina’s artistic circles, that he found what he calls “my community.”

Then came another revelation: a touring production of Les Miserables Nolan saw at the Saskatchewan Centre of the Arts when he was 13 or 14. “From that night forward, I knew that was what I wanted to do with my life.”

He began with local productions, performing with Regina Summer Stage and Regina Lyric Light Opera, and continued voice lessons, first with Hayes, then with Robert Ursan.

“I doubt I would be where I am today having not studied with Rob as a voice teacher,” Nolan says. “He and Betty are the reason I have any technique and can do this eight times a week.”

Nolan also joined Do It With Class Young People’s Theatre Co. “It was another affirmation that there was a community for me. In a town of 500 people, the focus is not very often put on the arts. It’s almost always sports. If you don’t fit into that peer group, it can be a struggle. DIWC was an affirmation, and very responsible for my success.”

Nolan moved to Toronto after high school, and attended the Randolph Academy, a musical theatre school, which is where he started his professional work. And hasn’t looked back since…

…well, except maybe once.

“Even now, with the success I’m having, I still kind of fantasize about a more stable life,” Nolan admits, and in 2004 he actually left the business for a year. “I did volunteer work at a children’s camp in St. Lucia for all of August and worked on the family farm. I travelled. I was serious about not working any more as an actor. I really wanted to make a different life.”

But in 2005 he returned to the stage. The role? Jesus in a production of Jesus Christ Superstar at the Sunshine Festival in Orillia.

That was followed by five seasons at the Stratford Festival…and the first steps toward Broadway.

In Nolan’s second year at Stratford Tony-award winning director Des McAnuff became artistic director. In his first meeting with McAnuff, Nolan recalls, “I did a monologue—I don’t think I sang—and we talked for five or ten minutes. He asked me what I would I like to do. I told him, ‘I want to play Jesus in Jesus Christ Superstar in this Festival.’”

Just recently McAnuff revealed to Nolan that that comment helped spark the new production. “He doesn’t normally think actors cast themselves well in roles,” Nolan marvels, “but he didn’t even audition me for it. He asked me to play Jesus before my first preview as Orlando in As You Like It. He approached me in the staircase and said, off the cuff, ‘I want you to play Jesus in Superstar next year.’ I was kind of dumfounded and blindsided. It was a dream role.”

And, he adds, with a laugh, “It was one of the first times I haven’t auditioned for a role. I could get used to that!”

After a smashing success in Stratford, the show moved to the La Jolla Playhouse in California, and then to Broadway.

It brought a larger Saskatchewan contingent than just Nolan to the Great White Way. The Stratford production had six Saskatchewanians:  Jacqueline Burtney (daughter of Andorlie Hillstrom, artistic director of Do It With Class), Matt Alfono and Kyle Golemba (both also DIWC alumni), Stephen Patterson and Mary Antonini. Golemba and Patterson decided to stay in Stratford for this season, but the others are in New York with Nolan.

“There are a lot of Saskatchewan people at the Stratford Festival,” Nolan notes. “They say the cold winters force us to be creative.” More seriously, he says, Saskatchewan offers extraordinary support for its arts community, and particularly for young people in the arts.

So is it overwhelming for a small-town prairie boy to perform on one of the storied stages of Broadway?

Nolan laughs. “I think my family keeps me grounded,” he says. “They’re very, very, very proud, but I think they would be very quick to slap me in the side of the head if I was getting carried away with my own ego.”

He admits, though, that, “If it had happened earlier, maybe I wouldn’t have been so grounded. I know who I am a lot more than I did when I was 23 or 24.”

He tries to look past the Broadway myth. Stratford, he notes, though it may lack the cachet of Broadway, is “creating artists, and nurturing artists, and creating great internationally groundbreaking work and nourishing the thirst of actors to deal with a classical text.”

Each performance is slightly different. “Sometimes I’m exhausted, energetic, sorrowful, joyful, hopeful, defeated—all of those things would have applied to Jesus Christ. He was an incredibly dualistic person, as many and most humans probably are. I find that wonderful to play. It leaves it open to be almost anything.

“Sometimes I’m out there and I’m thinking, ‘This can’t possibly be Jesus, I’m too angry,’ or, ‘I’m too happy,’ but all of that is Jesus. Over time I just have allowed myself to be anything. For me I know where it comes from,” (what he calls the “seed” of the role), “and there’s where I start my night.”

When he’s not on stage, what does he do for fun in the greatest city in the world?

Play softball, what else? Every Thursday for an hour and a half, in the Broadway Softball League. Other than that, “I spend a lot of time having to prepare—getting physical therapy that helps me do it over and over and over again.”

He did find time to visit Yankee Stadium. He was to sing “God Bless America” during the seventh-inning stretch of the Yankees’ home opener.

Nolan is committed to playing Jesus until mid-September, if the show runs that long, and would love to continue for another six months after that. Eventually, though, his time as Jesus will come to an end. And then?

He cheerfully admits he doesn’t have a clue. “I’ll eventually sort that out,” he says, then adds with considerable understatement, “This is big enough right now.”

Permanent link to this article: https://edwardwillett.com/2012/08/from-small-town-hockey-player-to-broadway-star-paul-nolans-improbable-journey/