Cover art for Right to Know 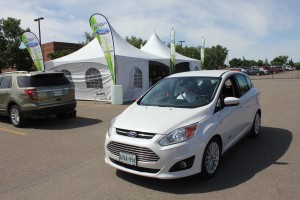 My Ford-driving adventures continue, because Ford continues to see fit to let me drive media cars and blog about them. Which is very nice. (Any other car companies want to do the same? Ferrari, perhaps? :))

Ford held a special event in Regina on June 18 to showcase its “green driving” efforts. A number of media types gathered in the parking lot of the RCMP Heritage Centre to learn about the latest Ford efforts in fuel efficiency and sustainability, take short test drives, and have a very pleasant lunch. Then, just this past week, I had the opportunity to spend a week driving one of the cars highlighted at that event, the C-MAX hybrid.

The event started with a video conference call with Gil Portalatin, Ford’s Chief Program Engineer, Electrified Powetrain Programs and Integration, who pointed out that Ford is the second-largest producer of electrified vehicles in the world, outside of Toyota. Ford makes hybrids (in which the battery that drives the electric side of the powertrain is charged by the internal combustion engine), plug-in hybrids (ditto, but with the added feature that the driver can also choose to drive it as a fully electric vehicle and charge it up as you would an electric) and full-electric vehicles.

Ford’s goal is to is have an option that fits anyone’s lifestyle, “something to suit any customer’s needs.”

A hybrid, of course (Ford offers two, the Fusion Hybrid and the C-MAX Hybrid), can be driven like any other car, with no need to worry about range: less need than with a regular car, in fact, since the hybrid uses the electric motor when it can, making the car highly fuel-efficient, with a range of about 1,200 kilometres on a full tank: its stated fuel efficiency is 4.0L/100 km in the city and 4.1L/100 km on the highway. 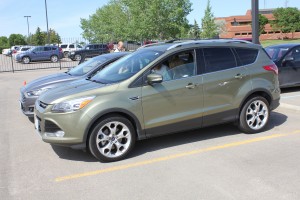 A plug-in hybrid (again, Ford has too: the Fusion Energi and the C-MAX Energi) offers the choice of driving a fully electric vehicle for short trips around town, then switching to gasoline for long trips. It’s stated fuel efficiency is impressive at 1.9 L/100 km city/highway combined.

The fully electric Ford Focus, meanwhile, has a 160-kilometre range at full charge, and a respectable top speed of 135 kph.

On the regular-engine side, Ford touts its EcoBoost lineup of smaller-displacement turbocharged engines, which, it says, “provides fuel savings of up to 20 percent and CO2 reductions of up to 15 percent compared with conventional engines.”

Ford is aiming to reduce carbon dioxide emissions from its vehicles by 30 percent in the U.S. and Europe and, over the next decade, to reduce weight from 250 to 750 pounds (depending on the type of vehicle), without compromising safety.

At the “Power of Choice” event, one of the other things Ford was highlighting was its sustainable materials strategy, its effort to find ways to use recycled or renewable material. So every Ford built in North America features soybean-based foam in seat cushions, backs and head restraints, which saves about five million pounds of petroleum annually. Yarns are being made into seat fabrics, denim is being recycled into interior padding, nylon carpeting is being recycled into resin for cylinder head covers, etc. Wheat straw, wood chips and corn husks are finding their uses, too, as is coconut fiber. The seat fabric in each electric Focus uses about 22 recycled 22-ounce plastic bottles.

Technology can go a long way toward increasing fuel efficiency, but the person at the wheel has a lot to do with it as well, and the other focus of the Power of Choice event was on green driving tips: i.e., aim for a constant speed, accelerate and brake smoothly, don’t leave the car idling, keep tires properly inflated, minimize the use of climate controls, etc., etc.

So, all that said, what were the cars like? On hand were a C-MAX Hybrid, a C-MAX Energi, and an Escape with EcoBoost. 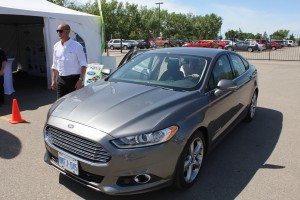 Uniformly, as I’ve found with all the Fords I’ve driven, they were a pleasure to drive. The test drives were short, but you’d be happy to live with any of the vehicles on a day-to-day basis, it seemed to me. Controls are well-designed, interiors are comfortable, even for someone of my size (6’2″), and…well…I’d be happy to own any one of them.

I got a chance to experience the C-MAX Hybrid (that’s the white one in the photos) much better last week, however, when I got to drive one for a week. Never got the chance to try it on the highway, but around town I enjoyed it a lot. And having driven a hybrid once before, this time I wasn’t taken aback the first time I pulled up to a stop sign and it felt like the engine had just died…because, of course, it had, switching to electric.

The last time I drove a hybrid was for a green driving challenge where the whole point was to score the highest fuel-efficiency among several drivers at the end of the challenge period. This time I was just using it as a second car, but I still found that I modified my driving simply because of the hybrid technology. It wasn’t because of the little cartoony screen where green leaves grow the more efficiently you drive: if there’s one thing I’d urge Ford to scrap, it’s that annoying bit of preachiness. It was simply because there’s something satisfying about the smoothly quiet feel of the electric motor. Golf carts are fun to drive for the same reason. I kept trying to keep the gauge that shows if you’re suing the gas engine or the electric motor from flipping over to the gasoline side. Admittedly, I could only do that on quiet streets where nobody would be riding my rear bumper wondering why I was accelerating at the pace of an arthritic snail, but when I could, I did. 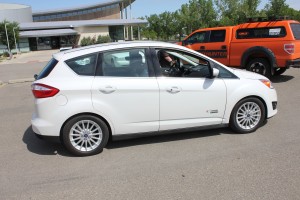 As for the rest of the car: again, it was comfortable, it was a nice size, it had all the nice Ford features I’ve come to enjoy, including a rear-view camera and a hands-free tailgate, and it had the MyFord Touch system with which I continue to have a love-hate relationship. Despite having driven several Fords with this computerized hands-free controller for things like entertainment, climate control and navigation, I still get annoyed at its voice telling me to “Try saying a device name, like…” over and over because I forgot what precise word goes with what precise function or simply because it failed to understand me. But maybe I’m just getting old and curmudgeonly.

So, bottom line: Ford is, as far as I can tell, working hard to achieve its goal of improved sustainable performance in all of its cars. I’m still not in the market for a new car yet, but when I am, there’s no question Fords will be high on my list of possibilities…and the C-MAX Hybrid or Energi would be high on my list of Fords.

Permanent link to this article: https://edwardwillett.com/2013/07/ford-green-driving-event-and-a-week-with-a-c-max-hybrid/