Singing with the Prairie Chamber Choir

An interview with Atom Egoyan

A review of Line Dance. Apparently I have a sense of humour. Who knew? 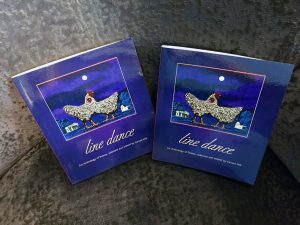 Here’s the first review I’ve seen of Line Dance, the collection of poems that resulted from…well, I’ll let the reviewer explain, because I’m tired of typing various versions of this:

Each weekday during Poetry Month in April, Hill [Poet Laureate Gerald Hill] e-mailed SK Writers’ Guild members a pair of first lines he’d selected from SK poetry books and invited folks to respond with poems of their own. Some, like professionals Brenda Schmidt and Ed Willett, sent poems every day. In the end, almost 500 pieces were submitted, and SK writing veteran-turned publisher, Byrna Barclay, bound what editor Hill deemed the best into a handsome package, featuring Saskatchewanian David Thauberger’s art on the cover.

I have six poems in the anthology, drawn from those I also posted online (start here), ably edited for length and other improvement. I get a shoutout in the review:

There’ll be a formal launch of the anthology at McNally Robinson Booksellers in Saskatoon on the evening of November 24. There’ll be brief readings and, I fear, actual line-dancing. Come out if you’re nearby and interested!

Permanent link to this article: https://edwardwillett.com/2016/11/a-review-of-line-dance-apparently-i-have-a-sense-of-humour-who-knew/