Great review for The Cityborn from RT Book Reviews

Door into Faerie a finalist for the 2017 Aurora Award for Best Young Adult Novel! 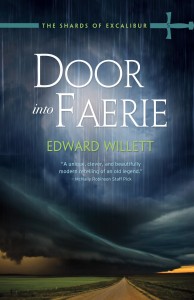 I’m honoured that Door into Faerie has been shortlisted or a 2017 Aurora Award (for the best Canadian science fiction and fantasy) in the Young Adult category. This is the second Shards of Excalibur book to be a finalist for the YA award: Twist of the Blade was also shortlisted. Other titles on the final ballot include Day of the Demon by Randy McCharles (CreateSpace), Heir to the Sky by Amanda Sun (Harlequin Teen), Icarus Down by James Bow (Scholastic Canada), Mik Murdonch: Crisis of Consience by Michel Plested (Evil Alter Ego Press), and The Wizard Killer – Season One by Adam Dreece (ADZO Publishing).

Any Canadian citizen or permanent resident can vote for the Aurora Awards! All you have to do is pay a $10 membership fee to the Canadian Science Fiction and Fantasy Association. Not only will you be able to vote, but you’ll receive a voters’ package that includes many of the nominated works in all categories in electronic format–including Door into Faerie!

It’s a great way to support Canadian science fiction and fantasy and reward your favourite writers, so please consider joining and voting!

And congratulations to everyone on the ballot! Here’s the complete list:

This ballot is for works done in 2016 by Canadians. The Aurora Awards are nominated by members of the Canadian Science Fiction and Fantasy Association. The top five nominated works were selected. Additional works were included where there was a tie for fifth place.

Best of the Decade

This is a special category for this year’s awards for works published between January 2001 and December 2010. Multi-volume stories were considered if they began prior to 2001 but ended before or close to 2011. We defined a multi-volume story as one with a continuous narrative. Finalists were chosen by an eight-person jury from across Canada. The winner will be chosen by our membership’s votes.

Permanent link to this article: https://edwardwillett.com/2017/05/door-into-faerie-a-finalist-for-the-2017-aurora-award-for-best-young-adult-novel/