Margaret Atwood: nice essay, shame you screwed up the ending

Things I Found in my Mother-in-Law’s House: Kid Stuff

Notes for this week’s CBC column…

***
If you have children, you know how child-related stuff tends to pile up. And since kids grow up so fast, some of it is barely used before they’re too big for it and it gets put away somewhere, never to see the light of day again…

…unless your son-in-law decides to turn the stuff he found in his mother-in-law’s house into a series on the radio, like Ed Willett.

This week Ed has dug into some of the children’s stuff he’s found in his old house, and I joined him there this morning to take a look.

Ed, does your mother-in-law, Dr. Alice Goodfellow, come from a big family?

No, she was an only child, which means there isn’t as much child-related stuff in the house as there might have been otherwise.

On the other hand, it does mean I can pretty much guess that anything I found was used by her! 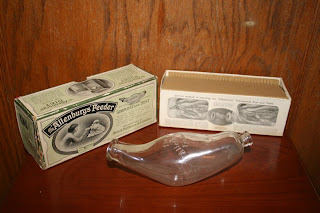 Take this, for instance: it’s probably a bottle my mother-in-law fed from when she was a baby. It’s an Allenburys Feeder. It’s pretty unusual looking to modern eyes, but this style of feeder was used for decades.

Allenburys Feeder was quite innovative when it was introduced in 1895. The most popular feeder in the late 1800s was turtle shaped, had a bent neck, and featured a long tube the baby sucked on. It could not be properly sterilized, and a high infant mortality rate was eventually linked to its use. The Allenburys Feeder, on the other hand, was boat shaped, and had a wide bent up neck that you pulled the teat over. The smaller opening at the other end was fitted with a vented rubber plug. The advantages: the bottle had gradations so you could measure food, had no angular corners so it could be cleaned better, had no long tube to breed germs, and had an effective valve to regulate the air flow, so the baby didn’t swallow air with her milk.

The original bottle was changed over the years to deal with some problems in the design of the valve end. This version came along in 1910 and remained on sale right through the 1950s; it was finally withdrawn from the market in 1958 when Allenburys merged with Glaxo.

The Allenburys Feeder was so ubiquitious at one time that when a Royal Dolls House was commissioned for Queen Mary by Sir Edwin Lutyens in the 1920s, it included a miniature Allenburys Feeder just one inch long, along with a mini food measure, food tin and rusks tin.

One thing associated with children is games, and I see you’ve found a couple of old ones: Quoits and…Parlor Croquet? I’ve played outdoor croquet, but I don’t think I’ve ever played it indoors.

I haven’t either, but if you have a large enough room, it could be fun, couldn’t it?

I can’t date this very precisely, but I’m guessing it’s from the late 1920s or early 1930s. It was made by Newton & Thompson Mfg. Co., which manufactured wooden toys in Brandon, Vermont, from about 1860 until the 1940s. The company was founded by Alexander Newton, who in 1855, at the age of 33, invented a kind of automated woodturning lathe that could mass-produce small wooden items like checkers, spinning tops, buttons, and other parts for toys. It’s rather remarkable the company stayed in business long enough to make this croquet set, since its works burned down twice in 1877 alone, and that same year suffered thousands of dollars in damage from a flood!

Croquet was a very popular sport for a while, and of course it’s still played, but not as often as it once was. Nobody’s entirely sure where it originated: some people say France, some say Ireland. In any event, the game between very popular in England in the 1860s and quickly spread to other English-speaking countries. One of its advantages was that it could be played by both men and women, although many people felt women had no business playing any such thing outside and should limit themselves to the indoor versions–such as parlor croquet.

After all, once women started playing sports, where could it lead? Nowhere but disaster. In fact, in 1878 the American Christian Review traced the inevitable downward spiral a woman could find herself in if she wasn’t careful. It all began with going to “a social party.” From there, she might to a “Social and play party,” then a croquet party, a picnic and croquet party, a combination picnic, croquet party and dance, leading inevitably to “Absence from church, Imprudent or immoral conduct, Exclusion from the church, A runaway match, Poverty and discontent, Shame and disgrace, Ruin.” Honestly, I don’t know why such a dangerous thing as even a parlor croquet game was allowed in this house. Perhaps I should burn it. 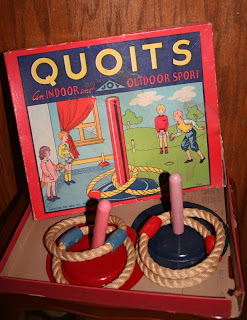 Quoits is a very old game, related to horseshoes (which came first depends on who you ask). It was being played in England a thousand years ago. In quoits, rings are thrown up and down a pitch at target pins at either end. In the 16th century attempts were being made to eradicate it from pubs and taverns because of its seedy character. The attempts failed, as such attempts generally do.

Indoor quoits appear to have been invented by someone in the late 19th century. This version of quoits, manufactured by the Artwood Toy Mfg. Co. (about which I’ve been unable to learn anything at all, except that they also made a popular line of toy boats) can be played indoors or out: it’s simply two wooden poles that can be set in metal bases, and four rope rings, two marked red, and two marked blue. The other interesting thing is that it contains scorekeeping from some long-ago games, featuring “Mrs. G.,” and “S.G.,” presumably Nancy and Sam Goodfellow, my grandmother and grandfather-in-law, and a “Doc H.” and “Mrs. H.”–so it was obviously a family game, and not just for kids!

Books are often popular gifts for children for Christmas and birthdays. Did you find anything interesting in that line? 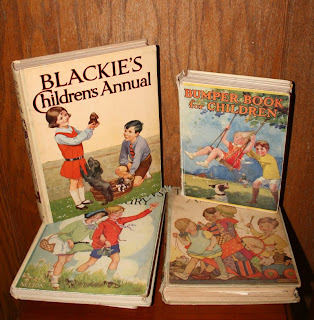 There are lots, but these caught my eye: they’re annual children’s treasuries, most of them given to Alice for Christmas or birthdays around 1930 and 1931.

Take Blackie’s Children’s Annual. According to an old article I found online from the December, 1929, issue of The New Zealand Railways Magazine, “Almost every publisher to-day caters for the child reader at his season of the year by issuing several Annuals under well-known distinctive titles.” It mentions Blackie’s in particular as one of “two most enjoyable miscellanies for youngsters of both sexes, whose stage of development maybe represented as midway between the “boys” and “girls,” and those who are “little ones.” It contains “Long Stories,” such as “The Baby with the Red Label,” and “The Town of Twisted People,” short stories and verse, lots of illustrations, both colour and black and white, and even crossword puzzles and a play.

According to a history of children’s annuals, the first annuals appeared in the early 1800s in England. Originally they were bound version of material printed over the course of the year in weekly or monthly magazines, but around 1904, with the publication of the first Blackie’s Children’s Annual (the one I have is the 28th year, and was given to Alice for Christmas in 1931), they started to include original material. Then, after the First World War, they really took off. And so, in addition to Blackie’s, I have here The Children’s Treasury, The Child’s Own, The Tiny Folk’s Annual (which, oddly enough, has someone else’s name in it: it says inside that it belongs to Robert Butler, Christmas 1923), and the Bumper Book for Children.

That’s all very interesting, Ed, but when I look around I see a lot more children’s stuff you haven’t even touched on.

That’s a bit more modern, Colin. I have a seven-year-old daughter. Come back in another 70 years, and maybe my son-in-law will be happy to explore the old toys he’s found in the house, everything from Webkinz to Wii.

Because I can tell you, that kid stuff belonging to the current generation is already piling up.

Permanent link to this article: https://edwardwillett.com/2008/09/things-i-found-in-my-mother-in-laws-house-kid-stuff/