You’re invited to my book launch! 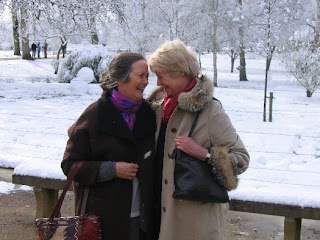 I’m not the only writing Willett, by any means. Allow me to introduce you to Marcia Willett (that’s her at left, with her agent, Dinah Wiener, in Christ Church Meadows). From the Macmillan Books website:

Born in Somerset, in the west country of England, on the day the atom bomb was dropped on Hiroshima, Marcia Willett was the youngest of five girls. Her family was unconventional and musical, but Marcia chose to train as a ballet dancer. Unfortunately her body did not develop with the classical proportions demanded by the Royal Ballet, so she studied to be a ballet teacher. Her first husband was a naval officer in the submarine service, with whom she had a son, Charles, now married and training to be a clergyman. Her second husband, Rodney, himself a writer and broadcaster, encouraged Marcia to write novels. She has published several novels in England; A Week in Winter is the first to be published in the United States.

Marcia began her career as a novelist when she was fifty years old. Until then she had been an avid reader and had never considered writing. When her writer husband, Rodney, suggested that she should—she laughed and dismissed the whole thing out of hand. However, after months of nagging she agreed, for the sake of peace and quiet, to see what she could do. Eventually, she handed Rodney the manuscript of her first novel and said, ‘Right, I’ve written it—now you sell it’. So he did.

Since that first novel Marcia has written twenty-two more (one is in production and will be published in 2009) as well as a number of short stories. Most of the books are written under her own name, four under the pseudonym ‘Willa Marsh.’ She is, as you would expect, working on number twenty-three.

Success has not been limited to this country: she is now published in sixteen other countries – with contracts for books to be published in two others – and has been in the bestseller lists of both Germany and Greece.

So how should her books be described? Marcia is a born storyteller and her books are beautifully written which makes them easy to read. Even so, they will challenge the thoughtful as they deal with the eternal problems that face everyone and often call for great strength of character if they are to be overcome.

A Week in Winter and The Children’s Hour were both selected by Readers Digest for inclusion in their ‘of Love and Life’ series and Marcia won their Magnum award for their most popular writer in 2002. Perhaps the title of that series says it all.

Permanent link to this article: https://edwardwillett.com/2008/09/willett-of-the-day-marcia-willett-novelist/