That other biography-writing Edward Willett 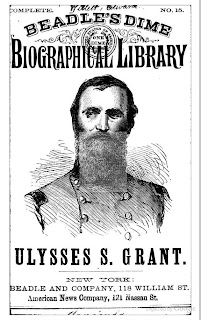 I am not the first Edward Willett to write books; nor am I the first to write biographies. Long before I squalled my first cries in the foothills of the mountains of New Mexico; long before I first set crayon to paper as a boy of six in the public schools of Tulia, Texas; long before we made our weary way north, north, through plains and hills (but mostly plains) from Lubbock to Saskatchewan; long before that fateful day when, the weather not being clement, I and my friend Richard Straker set ourselves to write short stories, an act from which I have never looked back, and which led directly to the writing of novels with my friend John (Scrawney) Smith in high school; long before I studied journalism, and wrote for a newspaper, and eventually began selling books; and long before I wrote my first biography, of the Ayatollah Khomeini, and even longer before I wrote my most recent biography of Andy Warhol, there was another man of my name who wrote, and his subject was that great American hero, Ulysses S. Grant, champion of the North in the dreadful War Between the States that caused so much bloodshed in the century before last. 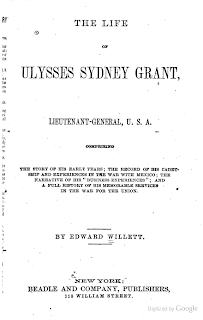 And if you wonder why I am writing like this, it’s because it rubs off when you read my predecessor’s work, for here, in all its glory, through the modern miracle of Google Books, is the opening to his biography of Grant:

TRULY great military genius is rare — it only appears at long intervals. The “great captains” of modern history can be numbered upon the fingers. In ancient and medieval days, when men fought hand to hand, and physical endurance alone decided the day, the number of eminent leaders was greater; but, who conceives that Alexander, Xerxes, Caesar, or Hannibal would have been eminent as leaders of modern hosts, where gunpowder and engineering genius are the ministers of destruction, rather than the battle-ax and broad-sword? England has a long line of distinguished commanders on her lists; but she suffered disaster, humiliation, defeat for years before the stubborn spirits of Arthur Wellesley and Horatio Nelson were evoked to regain her lost renown. The long record of her failures in coping with Napoleon only demonstrated the truth of the assumption that “genius is born, not made.” She had noble soldiers and experienced commanders at her call, yet these did not suffice to stay the tide of her ill-fortune — so lacking in the genius of war were her active directors. How vividly does her experience come before us Americans when we look back upon the first two years of our stupendous conflict for the Union ! Though brave men by legions came at the call — though officers sprung to their posts who were devoted in patriotism and able as captains, yet, the record of the contest was one of failure, illumined only here and there by some individual victory, which seemed granted to the Union arms that patriots might not become utterly dispirited, and give up the great struggle for a free government. We were in our state of probation, awaiting, in the midst of awful sacrifice, for the coming of one, who, out of our defeats, should wring victory — great, glorious, and lasting; who should bring peace by humiliating a foe whose dangerous spirit could be allayed only by pinning it to the earth with bayonet and cannon-ball.

And we waited not in vain. Slowly he came, looming up in the West, hewing his way through smoke, and fire, and battlements, until all eyes turned toward the hero of Vicksburg, and beheld, in him, the long-sought-for commander of the Union armies — the St. George who should ride down the grim dragon of slavery forever — the Wellesley who should restore the glory of our flag and the greatness of our country.

Truly, they don’t write ’em like that any more.

Permanent link to this article: https://edwardwillett.com/2008/11/that-other-biography-writing-edward-willett/