That other biography-writing Edward Willett

I have not mentioned anything about our physical training; well, we had plenty.

Our Officers knew we would be in competition with other units when we got to England, which was correct.

The troops that were athletically inclined were singled out and given training at the Toronto Central Y.M.C.A.

The building had two gymnasiums with a big door between. The idea was if you were in a 35 yd. race the door would be opened. You started in one gym and finished in the other.

In the relay race, Sergeant Hogarth fell, but the rest of the team: Gordon Huckle, Delmore, Sergeant Hamilton and I made up for the time and won the race.

Later, Warrant Staff Officer Hogarth and Staff Sergeant Hamilton were Rugby Players for the Argonauts. Before I joined up, I was asked to come to the Argonaut practice for tryout at Flying Wing, but I refused as I would not take a chance in being hurt when I was working my way through Technical School.

We had another Athlete Meet; our unit 3rd Division Supply Column against the 3rd Division Ammunition Column, which we won in points 48 to 44.

We had other little contests on the ship and Sgt. Hamilton put me on his committee to help with the sports. They were a great success and kept the troops interested.

We did no more serious athletic training until we got to our camp at Sborncliffe.

On the Holiday, May 24, 1916, we had a 3rd Division Supply and Ammunition Column Athlete Meet on Sir John Moore Plains. I won my heat in the 100 yds. and then won the final. I was disqualified in the Potato Race as I had knocked down the stand. I came 2nd in the N.C.O. Race, but we won the Relay Race: Hogarth, Carmichael, Hamilton and Goodfellow.

I also won a few other events: the 100 yd. low hurdles and the running broad jump.

The C.O. of the Camp was at the event and gave out the prizes. I was up several times to get my prize. Finally he said, “Goodfellow again, who the hell are you?”

I just laughed and said nothing. 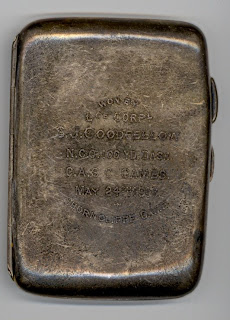 I gave all my prizes away except a Cigarette Case and a set of 2 Brushes in a leather case.

We had an Athletic Meet of the Canadian Forces at Cheriton Cricket Field. I won my heat and placed in the final.I was picked to be on the team to represent Canada in the 100, 220 and 440 yds. and Relay Race of all the British Force to be held in London. (June 6, 1916, reported that Lord Kitchener, of the Orkney Islands, drowned.)

We went on special training under a Sgt.-Major from an Edmonton Unit. He was a mess and didn’t know anything about training Athletes.

I did fairly well at the first, but so over trained that I could not run and was left at Camp.

I was in a handicap event on the programme, which Gordon Murray showed me. I had a 5 yd. handicap on Appleby, an English runner, Champion of the World in the 100 and 220 Event.

Haliburton, from Edmonton, was the best of the Canadians and went to London but did not place. The only event the Canadians won was the Obstacle Race and that was won by Gordon Murray of our Unit. He got the Lord French Silver Tray; a beautiful prize.

I returned to my Unit and was made Corporal of the Guard again.

Permanent link to this article: https://edwardwillett.com/2008/11/the-first-world-war-memoirs-of-sampson-j-goodfellow-part-6-army-athletics/