The First World War Memoirs of Sampson J. Goodfellow, Part 8: The Somme and beyond

What I Just Read: Bone Song 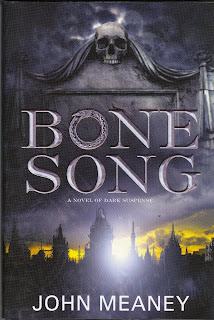 Bone Song by John Meaney was one of the books included in the bag-o’-free-books handed me at World Fantasy Convention. I liked the cover and the premise sounded interesting, so I decided to give it a shot.

I’m glad I did. It’s an interesting mixture of police procedural and gothic horror, with a pretty straightforward conspiracy-reaching-to-the-highest-levels-investigated-by-team-of-maverick-cops story (you know, one of those) that gains its interest from the macabre world Meaney has created, where power is generated by either corpses being magically fused inside massive underground reactors or teams of slack-jawed, mind-and-body-synchronized bald-headed children, depending on which country you’re in, and cars, furniture and elevators are as likely as not inhabited by wraiths. Seems some nasty mages are collecting the bones of opera singers (!), and our hero Donal has to put a stop to it. After an unfortunate beginning, he ends up on a task force headed by a wealthy zombie woman, with whom he naturally (if somewhat precipitously) falls in love, probably because he’s been infused with dark power by…
Well, never mind. If that sort of thing intrigues you, then this is the book or you. It started a bit conventionally for me (well, conventional if you read enough of this sort of fantastic fiction), but grew on me as I went along until I was racing along to see how it ended…except, of course, it didn’t really end, because (fair warning!) it’s the start of a series.
I’m sure I’ll read the second one, so I think I can safely say: recommended.

Permanent link to this article: https://edwardwillett.com/2008/11/what-i-just-read-bone-song/