Mrs. Reid remarked that the milk was getting too poor and looked at Fred and me; we looked guilty and Mrs. Reid knew what we had done. We were sent to bed without our supper but Jim sneaked in some food to us, although believe me it was a lesson; we never took another drink of the milk.

In the morning when we got up at seven to go to school, we got a bowl of porridge, a slice of Homemade Bread and a glass of milk then away we went meeting the Farm children from the district and walked the 3 1/2 miles to school.

Noon hour would come and we had been given a Penny to buy our lunch which was a treacle on a slice of bread and a glass of water and then away to play Rounders or Soccer Football.

When I became a Junior Baseball Player in Toronto, I did not have to be told or taught the fundamentals of the game. It is the same; hit the ball and run to get on base, but of course, Baseball is more scientific.

Our Village School was a two room building; a Lady taught the Juniors Class and a Man taught the higher grades. I progressed to the Senior grades when we left and Fred was in the lower grade, of course he was two years my junior.

When we got home to the cottage, we were given a bowl of porridge until the men came home.

During our stay at Langside Cottage, an Uncle, Mr. William Baillie, who had married Mother’s older sister and operated a Steam Laundry in the City of Toronto visited his Father in Edinburgh, and also visited my mother. He acquainted her of the opportunities in Canada for her two boys, and after my Mother gave the matter a great deal of thought, as Mother held a very good position, she finally decided to emigrate to Canada when my Uncle returned, which was the summer of 1902. I was 9 1/2 years and my brother was 7 1/2. 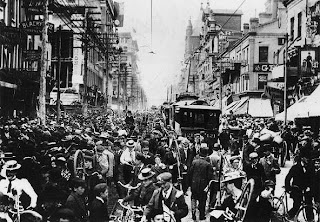 Mother came to Langside Cottage to get us and brought us to Edinburgh the night Ladysmith surrendered during the Boer War 1899 – 1902. This then ended the Conflict. (At left: Boer War celebrations in Toronto – Ed.)

The Reids were down hearted to see us leave but wished us good luck in our new country; Canada.

The Lady who operated the private Hotel and her daughter were with us and we had a wonderful night.

The Fireworks Display was beyond description and the people on the street were jubilant, shouting and dancing on the street. 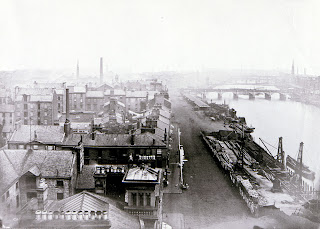 The next morning came too soon and we departed from Auld Reeky for Glasgow (At left – Ed.) We saw the large Ocean Boats in the River Clyde, and one was to take us to our new country; Canada.

What I could not understand was how the street cars operated with an overhead wire, as our car in Edinburgh moved by gripping an underground cable. (The same system as they used on one street in San Francisco.)

I stood on the street trying to understand how the cars could move with a little wheel on the end of a pole.

I was soon informed about the magic of Electricity.

We boarded the Liner (Boat) and we were soon on our way down the Clyde. It was (Auld Lang Syne); at least for me.

We stopped at the south end of Ireland and took on passengers from a Ferry Boat, then we were on our way.

It was a rough passage and several times the Hatches were closed and therefore, we could not go on deck.

One time the angle of the deck was such a degree that my Uncle’s leg went through the deck guard railing.

We saw Whales spouting water in the air and fish following the boat for food and when we approached the shores, swarms of Gulls would surround the boat looking for food.

We, finally, reached the St. Lawrence River, and then Quebec where the 3rd Class Passengers disembarked.

Permanent link to this article: https://edwardwillett.com/2008/12/the-first-world-war-memoirs-of-sampson-j-goodfellow-part-30-flashback-off-to-canada/