My favorite email of the year… 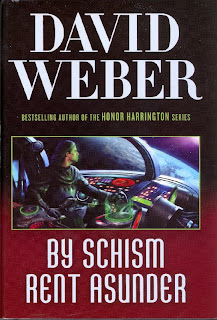 By Schism Rent Asunder is the second book in David Weber’s new series that began with Off Armageddon Reef. Before I read it someone warned me that they thought it didn’t really work as a stand-alone novel: it’s very much a bridge between what happened in the first book and what’s going to happen in the next (which, thankfully from my point of view, is due out in mid-2009).

I think that’s a fair criticism, but on the other hand, so what? If you were as hooked by Off Armageddon Reef as I was, you’ll devour this book just to see what happens next; and if you weren’t, you won’t bother with it. Its unlikely anyone will pick this book up first.
Among the elements that made Off Armageddon Reef work so well for me were the climactic naval battles near the end. There are certainly some nice action set pieces in this book, too, but not on the scale of the previous book. Instead, there’s a great deal of talking and thinking, and while it’s interesting talking and thinking, it doesn’t have the frantic pace of a real action-adventure.
That’s OK with me, but it might not satisfy some readers.
There’s another aspect of both this book (and the first, but especially this one) that I enjoyed very much, and that’s the central role played by religion. The mutated (in fact, from a strict doctrinal form of view, you’d have to say perverted) version of what is essentially the Catholic Church in these stories is an intriguing creation, but what’s even better, from my point of view, is that Weber takes religion seriously: even though Mother Church is based on a monstrous lie, the impulse of faith in God that moves the people of Safehold is not treated as foolishness based on falsehood, but as an important and immutable facet of human nature. Too much science fiction proceeds from the notion that somehow in the future all religions will whither away, which I think is often just wishful thinking on the part of the anti-religious (or, more typically, anti-Christian, since other “exotic” religions seldom come in for the same kind of scathing attack) writers who are widespread in the field.
This isn’t true in Weber’s work–and not, I hope, in mine, either. Although my own futuristic religion, The Body Purified, is a much nastier piece of work than Weber’s Mother Church, and really doesn’t have much in the way of redeeming qualities at all, I’ve made a point, both in Marseguro but especially in Terra Insegura, of making it clear that the older religions are still around in the future and still have believing and faithful adherents. There are several theologically-tinged discussions in both Marseguro and Terra Insegura as characters wrestle with questions of faith. Not too surprising, then, that I find the scenes of extensive wrestling with questions of faith in By Schism Rent Asunder as interesting, in their own way, as the exciting action sequences.
(Actually, I also found the extensive discussions of technical questions surrounding the upgrading of artillery interesting, as well, but that’s just me.)
So, to sum up, I highly recommend By Schim Rent Asunder…but I strongly urge you to read Off Armageddon Reef first. And then you, like me, can wait impatiently for the third book to arrive in a few months.

Permanent link to this article: https://edwardwillett.com/2008/12/what-ive-just-read-by-schism-rent-asunder/