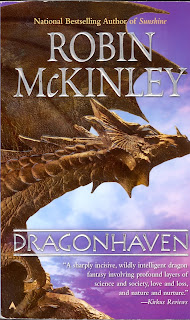 You’d think, after all these years, that there’d be nothing new to say about dragons (just like there is very little new to say about vampires), but Robin McKinley proves that wrong with Dragonhaven, originally published in hardcover by G.P. Putnam but now out in paperback from Ace.

This was one of the books included in my book bag at the World Fantasy Convention, and I admit I avoided it for a while because…well, because it had the word “dragon” in the title and that made me assume it was just a mid-point book in some endless series. But I’m glad I finally picked it up, because it proved to be an intelligent and very enjoyable young adult fantasy–or possibly science fiction, depending on your personal definitions–that does, in fact, offer a new take on dragons.
McKinley pulls that off by making this, not a generic dragon fantasy, but an alternate history dragon fantasy/science fiction story, set in a world that’s just like ours except…well, except there are dragons. Real ones. Enormous, fire-breathing, the whole bit. (Nessie is apparently also real, and some sort of possibly intelligent lichens have just been found on Mars, just to emphasize that we’re not in Kansas…at least, not our Kansas…any more.)
Actually, we’re in Wyoming, or thereabouts, because dragons havee been driven to extinction all over the world except for a few enclaves, and it’s in the largest, Smokehill, five million acres of wilderness (and having recently driven through Wyoming, its location there makes perfect sense to me), that the story takes place. Jake, who narrates in first person, is the son of the director of Smokehill. His mother died in an accident when he was twelve. Smokehill is surrounded by a high-tech fence that’s supposed to keep dragons in and people out, but somehow a poacher gets through the fence, and Jake, out on his first solo camping trip at the age of fourteen, finds the remains of the poacher and the mother dragon the poacher killed…and one surviving baby dragon. Driven by impulses he doesn’t full understand, Jake rescues the baby (a fetus, really, since dragons are born live but not-fully-developed, then normally spend the next few months in their mother’s pouch, rather like kangaroos), and finds himself in the unique position of being surrogate mother to “Lois,” as he dubs her. This is both painful (he’s not really designed to carry a baby dragon next to his skin, but that’s what she insists on) and highly illegal: humans in this alternate world still fear dragons, and the U.S. has passed a law that makes it a crime to help one survive.
Still, help Lois survive he does, even while Smokehill threatens to come apart around him as news of the poacher’s death gets out: the poacher has rich and powerful parents who blame the dragon, not their idiot son, for what happened. Along the way, Jake, who has never wanted to do anything but study dragons, learns more about them than anyone before him…and discovers they’re a lot more than just exotic animals.
The structure of the book is a little odd. The bulk of it is an account supposedly written by Jake, at 18, about the previous four years. It seems to come to a climax and a conclusion, but then it goes on and on as Jake thinks out loud about what has happened…and then it shifts into another section, written five years afterward, when Jake is 23. A lot more has happened in those years, and this final section includes the real climax. But I think the pacing is a bit off in the switch-over between the Jake-writing-at-18 and Jake-writing-at-23 sections; the book bottoms out and takes a little while to get back into gear.
That’s a minor complaint. Overall, I very much enjoyed Dragonhaven. Jake is an appealing narrator and McKinley wonderfully captured his teenage voice throughout. And the ending even brought a lump to my throat, although admittedly I’m an easy mark.
It’s a YA book, but adults will enjoy it, too. Recommended!

Permanent link to this article: https://edwardwillett.com/2009/01/what-ive-just-read-dragonhaven/