My review of "Opera for Skeptics"…

My CBC review of Wingfield’s Inferno

What I’ve Just Read: The Moon is a Harsh Mistress 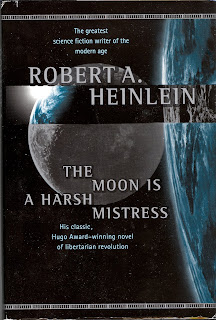 Yes, of course I’d already read The Moon is a Harsh Mistress, but not for many, many years–probably not since I was a teenager in fact. And you know what? It holds up. For a 40-year-old science fiction novel, it holds up very well indeed.

My wife and I read this one together, and she absolutely loved it. (She also recently read Starship Troopers for the first time, and loved that one, too. I knew I’d made a smart choice marrying her!)

Sure, some of the technological details have dated: the idea that a computer has to be massive to be powerful has long since been discarded, and some of the capabilities “Mike” is described as having–such as the ability to create convincing video–which tax “him” to the max are, of course, now available via relatively run-of-the-mill computers. The constant reliance on telephone lines to communicate–land lines, at that–also seems a bit dated. But never mind that. The ideas at the heart of the book–about the proper relationship between individual liberty and government power–couldn’t be more timely in an ear when the latter appears to be growing all the time. And Mike’s fate at the end is still poignant.

I’m not a hard-core libertarian by any means, but libertarian probably describes many of my core political beliefs more than anything else. The cover blurb of this edition (published by Tor, although I got it through the Science Fiction Book Club) calls it “His classic, Hugo Award-winning novel of libertarian revolution.” Even when I didn’t agree with everything said about the merits of libertarianism, I enjoyed engaging with the arguments.

If you haven’t read this, you’re missing one of the classic works of science fiction, by the man who shaped the field during his heyday more than anyone else.

It should go without saying, but…recommended!

Permanent link to this article: https://edwardwillett.com/2009/02/what-ive-just-read-the-moon-is-a-harsh-mistress-2/