My review of Globe Theatre’s production of Doubt, A Parable 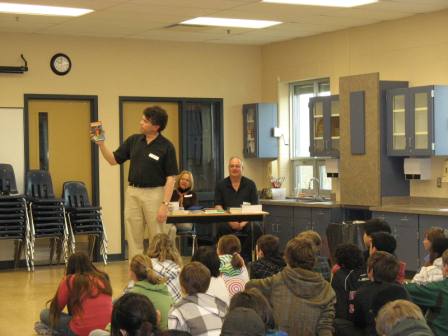 I attended a terrific event today at Regina’s St. Gabriel and Jack MacKenzie schools. Called World Book Day Saskatchewan, it was a celebration of Saskatchewan authors.

Besides myself, Alison Lohans, Anne Patton, Dave Glaze, Deana Driver, Glenda Goertzen, Jean Freeman, Judith Silverthorne, Linda Aksomitis, Lori Punshon, Mary Harelkin Bishop, Maureen Ulrich, Mercedes Montgomery, Myrna Guymer, Sharon Plumb Hamilton, Warren James and Wilfred Burton took part, with kudos for the organization of the event (which we hope will be only the First Annual) going primarily to Judith Silverthorne (who took the picture of me above, speaking to a group of Grade 7s and 8s first thing this morning).

We each had about 45 minutes to spend in a “breakout session” (which is what I’m doing in the photograph), just informally talking to kids and answering their questions. My group was vewy vewy quiet (perhaps they were hunting rabbits–hey, this blog used to be called Hassenpfeffer, so it would make sense), so I mostly talked, giving my usual spiel about how I became a writer and making up my own questions about how much I get paid (not enough), cover art (hit and miss–nothing I can do about it), where I get my ideas, etc.

While some of us were in the breakout rooms, others were giving 10-minute readings. I read twice to two different groups, both times from my award-winning 2002 fantasy novel Spirit Singer; there’s a great scene that’s just the right length and ends with a cliffhanger (rather literally, since the action takes place on a cliff). Hundreds of kids from several different schools attended, and since the authors ran the gamut from picture-book writers to YA writers, there was something for everyone. (And for the authors at lunch–pizza!)

We didn’t sell as many books as we would have liked, but we sold some, and there’s always next year. I enjoyed it and thought it really, for something quite complicated, went off like clockwork. And more than one youngster came forward and asked one of the writers about how to improve their writing and eventually get published. (“Don’t do it! I don’t need the competition!” is not, apparently, an acceptable answer, so I tried to do better than that.)

Oh, and I also got in one performance of “Me” from Beauty and the Beast, which I’ll sing at the drop of a hat, so all in all, a good day!