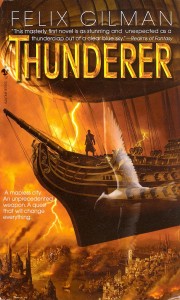 I’ve fallen a bit behind in posting my mini-reviews of the books I read, but I’m going to do my best to catch up in the next little while, beginning with Felix Gilman‘s Thunderer .

There’s a long tradition of fabulous and exotic cities in fantasy fiction, from Gormanghast to Minas Tirith to Ankh-Morpork, but few that are stranger or more fascinating than Ararat, the city to which a man named Arjun comes in search of a missing god, only to find that it’s pretty much like tracing a needle in a haystack in place that is plagued with gods, where streets and buildings and whole neighborhoods change at the whim of the gods, and where no one is even certain what the gods are…or if they are gods at all.

On the day Arjun arrives, one of these gods, the Bird, soars over the city and changes everything. A young man named Jack gains the ability to fly and move with lightning speed. A sea captain takes command of a new ship that can likewise fly, but in the process loses the woman he loves. And soon Arjun crosses paths with a mysterious man who claims to capture bits of the gods in glass cases, sets one of those bits free, turns one of the gods into a monster…and then begins to learn some pretty peculiar abilities himself from another version of that same mysterious character.

It’s a complicated story full of politics and bloodshed, with a cast of characters straight out of Dickens or Shakespeare–but all of them are overshadowed by Ararat itself, which is really the main character, immense, inexplicable, and ever-changing, a combination of a memorable epic-fantasy city and metaphor for the many-worlds interpretation of quantum physics writ large.

I liked Thunderer a lot, and I’m glad to hear there’s a sequel coming.  Gilman got my vote for the John W. Campbell Award for Best New Writer on the strength of this book, so…highly recommended!

Permanent link to this article: https://edwardwillett.com/2009/04/book-review-thunderer-by-felix-gilman/