McNally Robinson posts an interview with me 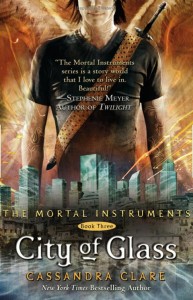 City of Glass is the third and concluding book in Cassandra Clare’s The Mortal Instruments YA fantasy trilogy (the previous two being City of Bones and City of Ashes), and the proof that enjoyed the first two quite a bit (aside from the fact I said as much on this blog) is that I bought it in hardcover as soon as I saw it.

There’s not much point in summarizing what happens in this one, since the only way anyone is ever going to read it is if they’ve read the first two and enjoyed them. Suffice it to say that all the angsty teens from the previous books, with star-crossed would-be-lovers-if-they-weren’t-siblings Clary and Jace and Clary’s best-friend-turned-vampire Simon at the centre of things, are here, that there are a number of big surprises in store for them (although I have to say I guessed the Biggest Surprise of All a long, long time before the author did the Big Reveal), some Very Bad Things happen (the death of one character in particular rather shocked me, but certainly demonstrated the author’s determination to keep the stakes high), and the ending satisfied. The Buffy vibes have lessened slightly since the first book, though I can’t deny both Buffy and Harry Potter came to mind at various times.

Nevertheless, if you’ve read the first two, I recommend this final volume. I don’t think you’ll be disappointed.

The cover, by the way, carries a blurb from Stephanie Meyer, who says, “The Mortal Instruments series is a story world that I love to live in. Beautiful!” Whether that’s a selling point or not may depend on how you feel about Twilight. Aside from envying her sales figures, I have no opinion on Meyer’s writing, not having read any of it. But I keep thinking maybe I should give it a try. After all, we both liked this…

(P.S. Although you probably shouldn’t read this one, or any of the Mortal Instrument books, hard on the heels of Peter V. Brett’s The Warded Man. There’s an eerie similarity to the magic systems, both of which involve the drawing of wards on a person’s flesh to enable them to better fight demons. Just coincidence, but I think Brett’s operating at a slightly higher level thatn Clare, both in writing and in storytelling (and of course he’s working in the adult rather than the YA arena, which gives him some advantages, complexity-wise), and while I still enjoyed City of Glass, I think its impact was oddly lessened by the echoes in my brain from my just-prior reading of The Warded Man.)

Permanent link to this article: https://edwardwillett.com/2009/05/book-review-city-of-glass-by-cassandra-clare/