If an author signs in a bookstore and no one comes near, does he make a sound? 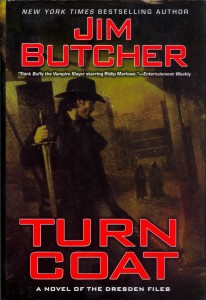 I blame my brother.

See, summer before last I was visiting him in Kincardine, Ontario, and discovered that he had several of the early Dresden Files books by Jim Butcher  in paperback. I started reading them. But he was missing some. So then I ordered the omnibus editions available through the Science Fiction Book Club. And then I ran out of those…and found myself buying the hardcover versions of new ones as soon as they appeared.

Which is just a long-winded way of saying that I reall, really like the Dresden Files books. And the latest, Turn Coat, doesn’t disappoint.

One of Butcher’s strengths is his ability to weave together, over the course of many books, a wide range of plot threads. The veteran Warden Morgan has been Harry Dresden’s bane for years, obviously considering him a prime target for elimination on behalf of the White Council. But suddenly Morgan shows up at Harry’s apartment in need of sanctuary. Seems he’s been wrongly accused of treason against the White Council. And as the cover blurb puts it, “Now Harry must uncover a traitor within the Council, keep a less than agreeable Morgan under wraps, and avoid coming under scrutiny himself. And a single mistake may cost someone his head. Like Harry…”

Harry’s first-person voice is as engaging as ever, there are some really interesting developments involving an invisible sentient island out in Lake Michigan, we find out more than we really wanted to know about the internal workings of the White Court of vampires (with one particularly disturbing scene late in the book to remind you very forcibly that even though the White vampires don’t suck blood, they aren’t Nice People) , we see more of the workings of the White Council than ever before, there are some knock-down drag-out magic-and-mayhem battles and…

Well, it’s got everything you could ask for in a Harry Dresden book, in other words. But just remember: read one Dresden Files book, and you may, like me, find yourself starting down the road to an expensive addicition.

Permanent link to this article: https://edwardwillett.com/2009/05/book-review-turn-coat-by-jim-butcher/