A new book to brag about: The Bounty Mutiny 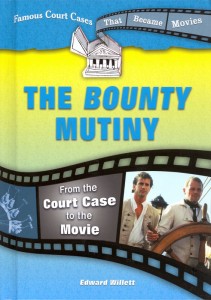 I knew it was coming, but I didn’t expect it to arrive so hard on the heels of Disease-Hunting Detective: my latest children’s non-fiction book, The Bounty Mutiny: from the Court Case to the Movie, showed up Monday from Enslow Publishers.

Here’s the description from the back of the book:

“The Bounty was a British ship visiting Tahiti in 1789 when some of the crew overthrew the captain, William Bligh, and set him adrift in a tiny boat with sailors loyal to him. The mutiny resulted in a number of trials—both of the men who mutinied and of Bligh for losing command of his ship. These fascinating events have been the source for numerous Hollywood movies, most recently The Bounty. In The Bounty Mutiny: From the Court Case to the Movie, Edward Willett explores the famous case and the movies it inspired.”

“The mutiny on the Bounty is one of the most misunderstood events in maritime history. Here, Edward Willett reveals the true events behind that episode, and attempts to explain why these have been obscured from popular memory by filmmakers who rarely let the facts get in the way of a good story. But, as Willett shows, the truth—if less romantic than fiction—is equally fascinating.” – Timothy G. Lynch, PhD, Assistant Professor, Maritime History, California Maritime Academy, California State University.

I daresay it’s the only book I’ll ever write which has Mel Gibson on the cover!

Permanent link to this article: https://edwardwillett.com/2009/07/a-new-book-to-brag-about-the-bounty-mutiny/