The first sentences I rewrote today…now with bonus photo! 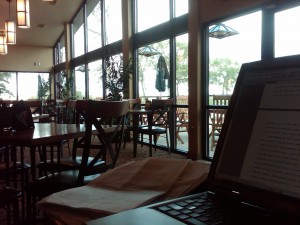 …will appear momentarily, but first, a picture. This is where I worked on Magebane this afternoon–if you look close, you can see some of it on the computer screen. It’s the Spike Lounge at the Wascana Country Club. Not as odd a choice as you might think: it’s usually quieter than a coffee shop, the scenery is nicer, and they serve a wider selection of food and, um, beverages than a coffee shop. I’ve quite enjoyed working out there these past few days.

I was still rewriting today, but I should be moving on to new Blue Fire material either tomorrow or Monday at the latest. Today’s first rewritten Blue Fire sentence was:

Unlike the large wagon she shared–used to share, she thought coldly–with her Grandfather, this was just a smallish stores wagon, bags of rice and beans and wheat and other staples stacked around the outside walls, leaving only a small open space in the middle.

And today’s first rewritten Magebane sentence (Magebane is a bit further away from the resumption of fresh-material-writing, I fear):

Once on the main floor, she continued along the plain corridors that ran behind the walls of the lavish rooms that visitors to the manor saw.

Permanent link to this article: https://edwardwillett.com/2009/07/the-first-sentences-i-rewrote-today-now-with-bonus-photo/