Winter issue of Fine Lifestyles Regina is out! 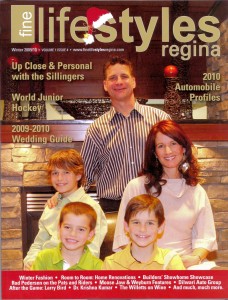 The Winter 2009/2010 issue of Fine Lifestyles Regina magazine is out, all 260 full-colour glossy pages of it. This is the second issue I’ve edited, and I also wrote several articles for it, including the cover story, an interview with just-retired NHL player Mike Sillinger, a Regina native who’s now moved back to the city with his family. As I did with the Premier Brad Wall interview from the last issue, I’ll post that to my blog once we’re getting close to the next issue.

Also included in this issue: the first ever wine column by my wife and I, called “The Willetts on Wine.” (And, yes, that is the name of our sadly inactive wine blog, but now that we’ve got this column, I’ll have to see about firing that up again on its own site.)

The magazine is being delivered this week to various locations around the city. Keep your eyes open for it! At some point, it will also show up in facsimile form at the Fine Lifestyles Regina website.

Permanent link to this article: https://edwardwillett.com/2009/12/winter-issue-of-fine-lifestyles-regina-is-out/