A reminder about Aurora Award nominations 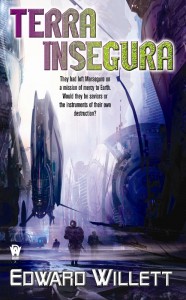 The deadline for nominating works for a Prix Aurora Award is fast approaching. Today is the day when mail-in ballots must be postmarked by, and the deadline for online nominations is February 15.

The Aurora Awards, for the best Canadian works of science fiction and fantasy, are nominated and voted on by fans. Any Canadian citizen or permanent resident can nominate up to three works or individuals in a range of categories in both English and French. The five works with the most nominations go on the final ballot and are voted on by members of CanVention, the annual national SF convention. It costs nothing to nominate but there is a fee for voting on the final ballot. The mail-in and on-line nomination forms are here.

My novel Marseguro (DAW Books) won the Aurora Award for best long-form work in English last year, and its sequel, Terra Insegura, is eligible this year. You can read the first two chapters of Terra Insegura (or listen to me read them) online here.

Remember, nominating is free! And it only takes a couple of minutes.

Permanent link to this article: https://edwardwillett.com/2010/02/a-reminder-about-aurora-award-nominations/