Song of the Sword recommended in Saskatoon Star-Phoenix 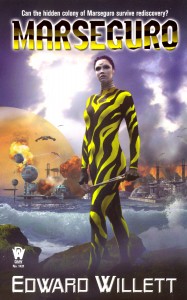 When I was a high school debater, in the dim, distant past, I always began debates by defining my terms.

So let me begin this new regular column in Freelance the same way: by defining what I’m going to be talking about.

I’m going to be focusing in this column on what is referred to in polite literary society as “speculative fiction.”

That’s not a term I often use myself, since it is sometimes a euphemism used by writers horrified by the thought of getting icky “genre” germs all over their nice clean “literary” story, but it has its place as a useful umbrella, beneath which shelter three more specific genres, fantasy, science fiction and horror.

Of the three, the easiest to define, it seems to me, is horror. Indeed, it defines itself: it’s fiction designed to invoke the emotional response that gives it its name. Some horror is completely, if disquietingly, realistic–think of a story of a serial killer on the loose–but much of it has a fantastic element–ghosts, vampires, etc.–which is why it is sometimes called “dark fantasy.”

Which brings us to the definition of fantasy. Here’s one I just made up, but I think it’s pretty good:  a story is a fantasy when the events within it violate physical laws as we know them and the story either makes no effort to justify that violation or else attributes it to magic or supernatural forces.

That’s a broad definition; but then, fantasy is a broad genre, with deep roots, from Homer’s Iliad and Odyssey to Shakespeare’s The Tempest, Dickens’s A Christmas Carol, and, of course, J.R.R. Tolkien’s The Lord of the Rings.

Science fiction, though narrower in scope (since it attempts to at least pretend to conform to the laws of science) seems to also be much harder to define, unless you’re happy with Margaret Atwood’s infamous decree that science fiction is “talking squids in outer space.”

Here’s one I like, from Canada’s best-known and most successful science fiction writer, Robert J. Sawyer: “Science fiction is a laboratory for thought experiments about the human condition; it lets us examine what it means to be human in ways that we simply can’t in real life, because it would be unethical or impractical to conduct the experiments.

“Using literary devices such as displacement in time or space, or metaphorical others who let us exaggerate or isolate parts of the human psyche, science fiction allows us to see ourselves from odd angles, catching glimpses of truths that might otherwise be hidden from view.”

So, when I write a novel (Marseguro) about genetically modified humans being persecuted by religious extremists in the far future, I am in some small way wrestling with issues that are arising now and will continue to arise into the future. I could deal with those same issues in a fantasy, where perhaps the humans would be modified by magic rather than science, but the issues, of otherness and alienation and religious persecution, would be the same.

But it would be much harder to wrestle with those questions in a mainstream novel, because we don’t yet have any humans genetically modified so as to be distinct from the rest of us: and the moment I introduce them, I’m writing science fiction. In 20 years’ time, though, they may well be the subject of mainstream fiction.

See how that works?

Having said all that, that’s the “eat your vegetables” rationale for writing science fiction and fantasy. Here’s another reason, and every bit as important: fiction is entertainment, and a ripping good yarn with intergalactic empires, aliens, spaceships, space princesses and, yes, talking squid, is my idea of great entertainment.

Science fiction and fantasy encompasses everything from grim near-future cautionary tales about cities flooded by rising oceans to madcap adventures about sword-swinging female barbarians battling giant spiders. All of time, space and imagination are your playground, which is why I’ve never understood why I’m so often asked why I write this stuff. To me the greater puzzlement is that so many writers don’t!

But perhaps you do. Or want to.  Or perhaps you’re just curious about this field of literature, home of the never-was and the still-might-be, rather than the good old here-and-now.

Over the next few columns, I’ll introduce you to the writers, books and trends making waves in “speculative fiction” (sigh), point you to some additional resources, provide some writing tips, and even offer up a few markets for your own fantastic fiction. I hope you enjoy the ride!

And finally, if you have any specific questions, I’m all ears (which in a fantasy or science fiction story is not necessarily metaphorical). Email me at ewillett@sasktel.net and watch for an answer in a future column!

Permanent link to this article: https://edwardwillett.com/2010/12/the-space-time-continuum-defining-my-terms/