Bless me, Father Rhysling, for I have sinned…

Cover art for Twist of the Blade! 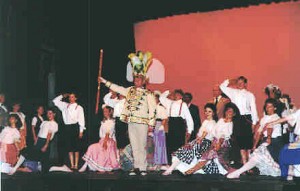 As the classic Disney animated film Fantasia opens, a symphony orchestra starts to play, and the music emerging from the instruments becomes visible as blasts of color and dancing shapes.

In real life, alas, music is primarily an auditory rather than visual experience. Although there is certainly interest to be had in watching a musician live (and, as I wrote recently, what we see may even influence our impression of the sounds produced, at least when it comes to percussionists), we’re generally able to enjoy music just fine, and sometimes better, without any visual component at all: hence the people you see closing their eyes at symphonies. (Not the snoring ones, the other ones.)

But a number of researchers have found ways to make music visible—perhaps not quite in Disney fashion, but in a fascinating way all the same.

Chief among these is Bernard Richardson of the School of Physics and Astronomy at Cardiff University in Wales.

For many years, the school’s “acoustic group” has used a technique called “holographic interferometry” to study the vibrations of musical instruments. These vibrations are tiny: on the order of a micron (one thousandth of a millimeter). A hologram is a record of a light field, the light bouncing off of an object in all directions, created using a laser. A hologram allows the light field to be reconstructed so that the eye sees the object, apparently in three dimensions, even when the object itself is no longer present.

Holographic interferometry as applied to musical instruments involves creating a holographic record of the light bouncing off the vibrating instrument using a laser beam that has been split into an illuminating beam and a reference beam. The areas that vibrate the most show up as patterns of interference, basically dark bands on the image.

The results are both beautiful and informative.

As Richardson puts it, “Guitar-making is a compromise between stiffness and flexibility. The struts on the underside of the soundboard help to create a lightweight but strong plate which creates lots of sound in response to the vibrations of the strings. At low frequencies, the guitar plate moves back and forth not unlike the piston of a loudspeaker.”

In the holographic images, at low frequencies (low pitch) there’s a bright line near the ribs: that’s a “nodal,” or non-moving, line. This mode of vibration, Richardson says, creates large volume changes in the air and thus produces a lot of sound.

At higher pitches the plate of the soundboard divides into distinct patches separated by nodal lines. Not as much sound radiates from these modes, but they color the sound: and since these patterns are different for different instruments, the shape of these patterns is a visual representation of the unique voices of various stringed instruments.

As the frequency continues to increase, the vibrating patches between the nodal lines get smaller and smaller. “Studies of these vibrations and the way they convey energy of the vibrating strings as sound to the listener can assist makers to ‘fine tune’ the tone quality of their instruments,” Richardson comments.

But it’s not just string instruments whose sound can be visualized. I played various brass instruments in high school: primarily trumpet and French horn, but I tried my hand at everything at one point or another, including trombone…which was why a story headlined “Shock wave from trombone filmed” on the BBC News website caught my eye.

Back in 1995 Mico Hirschberg of the Eindhove University of Technology posited the notion that trombones are capable of producing intense pressure waves that could even briefly exceed the speed of sound. Now Kazuyoshi Takayama and Kioynobu Ohtani from Tohoku University’s Institute of Fluid Science have confirmed that idea: not only that, they’ve captured it visually.

They used a technique called schlieren photography that can image variations in the refractive index (the speed of light in a given medium) in air. Shock waves create a stark, sudden change in the refractive index…and sure enough, in their video (which looks rather romantic, actually, since it’s of a trombone playing in front of a big round white background that looks like the full moon), you can see curved shock waves issuing forth from the instrument’s bell.

The researchers measured the pressure at the instrument’s mouthpiece, in the middle of its length, and at the output, and discovered that a train of compression waves built up through the trombone’s length, emerging from the bell as shock waves that travelled briefly at about one percent above the speed of sound.

Such shock waves presumably issue from the bells of other brass instruments, too, especially trumpets…

I always heard that film was “ahead of its time.” Guess this is the proof!

(The photo: Regina Lyric Light Opera’s 1989 production of The Music Man, featuring the song “Seventy-Six Trombones.” I played Charlie Cowell, the rather villainous anvil salesman. I’m not in the photo.)

Permanent link to this article: https://edwardwillett.com/2011/06/visualizing-musical-vibrations/