Shapers of Worlds, the Kickstarted anthology featuring work by some of the first-year guests on my podcast, The Worldshapers, will likely be the next Shadowpaw Press title, but I’m also working on others, including a young-adult …

A short story reading on video

Lyric Theatre in Swift Current asked me to record a short story for the “Write Out Loud” component of their Lyric Theatre Digital Stage. I chose to read “Memory Jam” from my collection Paths to the Stars (available …

I’m very pleased to announce that my podcast, The Worldshapers (“Conversations with science fiction and fantasy authors about the creative process”) has, for the second year in a row, been nominated for the Aurora Award … 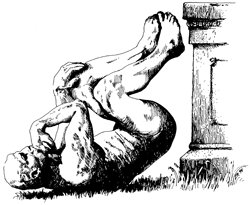 Ah, it’s my favorite time of the year, a time when this column practically writes itself. It’s Ig Nobel Prize time.

The Ig Nobel Prizes are presented by the science comedy magazine Annals of Improbable Research, to honour achievements that “first make people laugh, and then make them think.”

At the ceremony, genuine (and “genuinely bemused”) Nobel Laureates present the prizes. There are also other delights, such as mini-operas (this year’s: “Chemist in a Coffee Shop”) and, most notably, the 24/7 lectures, in which noted scientists explain their subject twice, offering a complete technical description in 24 seconds, followed by a concise summary anyone can understand in seven words (this year’s topics: Stress Responses, Single-Walled Carbon Nanotubes, Chemistry and Vagina pH). The ceremony can be watched online.

And now, without further ado, this year’s winners:

The physiology prize went to a quartet of scientists from various countries for their riveting study, “No Evidence of Contagious Yawning in the Red-Footed Tortoise,” which I find intriguing mainly because it seems to indicate there is non-contagious yawning in red-footed tortoises (tortii?).(Of course, if it took me that long to get wherever I was going, I’d be yawning before I got there, too.)

The coveted chemistry prize (this year’s ceremony theme was chemistry) was won by researchers from Japan who figured out the ideal density of airborne wasabi needed to wake sleepers up in the case of an emergency, and then used that knowledge to invent their patented wasabi alarm. Buy now and get a free side-order of sushi! Supplies are limited, and operators are standing by!

The medicine prize went to researchers from the Netherlands, Belgium, the U.S. and Australia, for demonstrating in two separate studies that people make better decisions about some things, but worse decisions about other things, when they have a strong need to urinate.

Which reminds me, I’ll be right back.

Much relieved, let us carry on. The psychology prize was won by Karl Halvor Teigen of the University of Oslo, for his study “Is a Sigh ‘Just a Sigh’? Sighs as Emotional Signals and Responses to a Difficult Task.”

Then there was the literature prize (near and dear to my heart), which went to John Perry of Stanford University for his Theory of Structured Procrastination, which states that to be a high achiever, you should work on something important, using it as a way to avoid doing something that’s even more important. This is exactly my method of procrastination, assuming you consider playing word games on Facebook important.

The biology prize went to what may be the finest piece of Australian research ever: Darry Gwynne and David Rentz’s discovery that a certain kind of beetle mistakes stubby beer bottles for female beetles, making them, if you’ll pardon the expression, bottle-boinking beetles. And they don’t even consume the contents first.

The prize for physics was won by researchers from France and the Netherlands for determining why discus throwers become dizzy and hammer throwers don’t. Alas, no demonstration was forthcoming at the ceremony.

The peace prize was awarded to the mayor of Vilnius, Lithuania, one Arturas Zuokas, who demonstrated on video that the problem of illegally parked luxury cars can be solved quite easily by running over them with a tank. Mr. Zuokas was even present to receive his award in person.

And finally, a Canadian winner! John Sanders of the University of Toronto won the public safety prize for a series of safety experiments he conducted (back in the mid-1960s; it can take time for the brilliance of research to be properly noted) in which a person drove an automobile on a major highway while a visor repeatedly flapped down over his face, blinding him.

And there you have it. Research to make you laugh, make you think…and make you hide your beer bottles. I look forward to next year’s Ig Nobel prizes.

Assuming the world doesn’t end on October 21, of course.