Alcohol on the brain 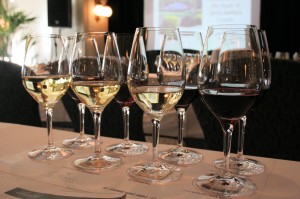 Human beings have been using and abusing alcohol for a very long time: roughly 10,000 years, give or take a long weekend.

The effects of drinking too much of the stuff have been known for every one of those 10,000 years (although individuals somehow seem to forget them within a remarkably short time frame).

For decades, scientists have been trying to understand the mechanism behind the reduced muscle coordination and sedative effects of alcohol. The assumption has been that alcohol acts on the brain’s neurons, but nobody could figure out exactly how.

A new study indicates that may be because they’ve been looking in the wrong place. Not only that, the study hints that it might be possible to create drugs that could be used to treat chronic alcohol dependence—or even to counter the short-term effects of drinking too much.

The study, out of Australia (a where people have been known to enjoy an occasional drink while throwing another shrimp on the barbie), indicates that these effects may not arise in the brain at all: instead, improbably, they may be caused by the way alcohol acts on the immune system.

The study focuses, as so many studies do, on mice.

Researchers at the University of Adelaide genetically engineered mice that are able to “hold their liquor” by deactivating something called the “Toll-like receptor 4,” or TLR-4.

TLR-4 is a member of a family of receptors that induce inflammation, one of the body’s main lines of defense against infection. TLR-4 was first identified in fruit flies, and is known to be present on immune-defence white blood cells in the bloodstream. It is also present on glial cells in the brain.

“Glial” comes from the Greek word for “glue,” and for a long time glial cells were seen as little more than the glue that held the more important neurons together. But in fact, glial cells make up around 90 percent of the cells in the brain and play many important roles in brain function—including protecting the brain against infection.

It appears that alcohol activates the TLR-4 receptor, causing the glial cells in a part of the brain called the hippocampus to send out an inflammation signal: essentially, alcohol acts on the brain just like an infection would, and sedation and unsteadiness are the results.

The evidence? The mice genetically engineered so that TLR-4 was inactive were resistant to the behavioral effects of alcohol. Not only did they refrain from getting into bar fights with mice twice their size, they were able to stay perched on a rotating log longer and were sedated for a much shorter time than normal drunken mice. (You know, I don’t believe I’ve ever before typed the phrase “normal drunken mice.”)

Next, the researchers treated normal mice with a drug called (+)-naloxone, which blocks TLR-4. Sure enough, the drug also reduced the effects of alcohol, halving the duration of sedation and shortening the recovery time for loss of balance.
So, does that mean you’ll someday be able to take a pill that blocks TLR-4 and then head out for an overindulgent evening without fear of consequences?

Um, no. The study showed that it might be possible to reduce the severity and duration of alcohol’s effects: not eliminate them. Also, there are some effects of alcohol people actually want, and blocking TLR4 might actually block the pleasurable effects, too, so it would be unlikely to be popular with drinkers.

But this drug, or others to be developed that could be taken by mouth (the particular drug used in the study has to be injected, and in any event no one knows yet if it is safe for use by people, as opposed to mice) could play a valuable role in the emergency treatment of people suffering from an alcohol overdose.

All I know is that if this research someday leads to a reduction in drunken karaoke, it will have made the world a better place for us all.

The photo: Wine glasses lined up ready for tasting at the 2010 International Festival of Wine and Food at the Banff Springs Hotel.

Permanent link to this article: https://edwardwillett.com/2011/10/alcohol-on-the-brain/