Belated Saturday Special from the Vaults: Landscape with Alien 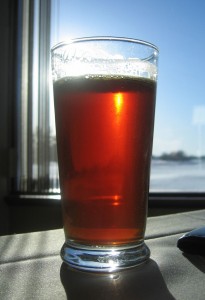 Every Christmas/New Year’s holiday season brings with it a spate of articles about alcohol—you know, like this one.

Alcohol is a very odd thing for us to imbibe, when you come right down to it. It is, after all, the waste product of another life-form: namely, yeast. There are very few other life forms whose waste products we willingly take into our body. So why do we do it?

The answer, of course, is that this particular waste product produces interesting side-effects when ingested: side-effects that humans discovered very, very early on (beer and wine-making were already well-established in the Middle East by 1500 B.C.).

Although alcohol, like barbiturates, tranquilizers and anesthetics, is a depressant (in that it depresses the central nervous system, not in that it makes you depressed, although, of course, it may), at low doses it actually acts as a mild stimulant, producing exhilaration, loss of restraints and inhibitions and talkativeness—which is what makes it popular at parties.

At higher doses you begin to see things like slurred speech, sensory disturbance, poor balance and impaired judgment, and as the blood-alcohol concentration continues to increase, you eventually reach fun things like unconsciousness, coma, and, ultimately, death. Which are not so popular at parties.

Alcohol is easily absorbed into the bloodstream through the walls of the small intestine. How quickly it is absorbed determines how quickly its effects are felt. (Drinking while eating is less intoxicating than drinking on an empty stomach, because the fat and protein in the foods in the stomach delay alcohol absorption.)

Alcohol is metabolized by the liver, at a rate of about 3/4 to one drink per hour. Drink more rapidly than that, and your blood alcohol concentration rises. Unfairly (but nothing says physiology has to be fair), if a man and a woman drink the same amount, the woman will usually become more intoxicated. Men have more of an enzyme called dehydrogenase that breaks down alcohol, and also tend to have more body water than women, which means the alcohol is more diluted than in women. Also, men tend to be larger.

As I noted earlier, every year new alcohol-related stories emerge just in time for the festive season. It’s almost as if writers expect people to imbibe more at this time of year than others. Go figure.

This year’s most interesting example: a press release about new research indicating that alcohol tastes sweeter when loud music is playing.

At the University of Portsmouth in the U.K., psychologist Lorenzo Stafford asked 80 participants (69 females and 11 males, all regular drinkers, aged between 18 and 28) to rate a selection of drinks on the basis of strength, sweetness and bitterness. While they were doing so, they were subjected to four different levels of distraction, from none all the way up to loud club-style music playing at the same time as someone was reading a news report.

The participants rated drinks significantly sweeter overall when they were listening to music alone: which is interesting, because it indicates it’s not the level of distraction but music specifically that makes alcohol taste sweeter. Since we tend to drink more of things that are sweet than things that are bitter, this could explain why, as previous research has shown, we tend to drink more and faster when loud music is playing.

Ah, you may say, but even if I drink a little too much, I always walk home rather than drive, so I’m all right, right?

Not so fast. Also appearing just in time for the holidays: an article detailing the dangers of walking under the influence. According to the journal Injury Prevention, from 1986 to 2002, 410 pedestrians in the U.S. were killed on New Year’s Day. Of those, 58 percent had high blood-alcohol concentrations. In 2008, says the Insurance Institute for Highway Safety, 38 percent of fatally injured pedestrians 16 and older had blood-alcohol concentrations at or above 0.08 percent. Never mind people who fall down the stairs or trip at home.

So this New Year’s Eve, remember this sage advice: even though you’re imbibing another life form’s waste product, you don’t have to get wasted.

(The photo: Beer in winter. Big Rock Traditional, for those who really, really need to know.)

Permanent link to this article: https://edwardwillett.com/2011/12/the-annual-alcohol-column/