Saturday Special from the Vaults (a bit late): Chapter 1 of The Chosen 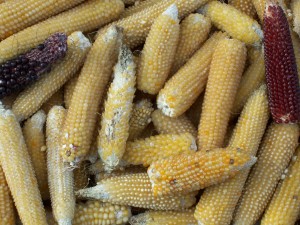 There’s nothing quite like the smell of popcorn. It makes you think of movie theatres, the circus, the midway. It makes you long for a handful. Or two. Or better yet, a whole bucket.

And best of all, just this week some research results were released that indicate popcorn is also a very healthy food!

I’ll get to that in a minute, but first, some background.

Nobody knows who first popped popcorn, which is thought to have originated in Mexico. Ears found in the Bat Cave of West Central New Mexico were dated to some 5,600 years ago, and 1,000-year-old grains of popcorn found in tombs along the east coast of Peru were so well-preserved they could still be popped.

By 1492, when Columbus sailed the ocean blue, popcorn was widespread in the Americas. English settlers were introduced to it at the famous first Thanksgiving feast in Plymouth, Massachusetts, to which Quadequina, brother of the Wampanoag chief Massasoit, reportedly brought a deerskin bag full of popped corn.

Popcorn kernels pop due to water stored inside a layer of soft starch beneath a hard outer casing. Heat the popcorn up to about 230 degrees Celsius and that water turns to steam, which creates so much pressure that the casing gives away. The kernel explodes, turning inside out, the starchy layer beneath the casing becoming the fluffy white confection we like to eat.

And perhaps we should be eating more of it. At the 243rd National Meeting & Exposition of the American Chemical Society, Joe Vinson of the University of Scranton in Pennsylvania and his colleagues reported on a new study that found that the healthy antioxidants known as polyphenols are actually more plentiful in popcorn than in fruits and vegetables.

The highest concentration of polyphenols and fiber is actually in the hull, which isn’t exactly everyone’s favorite part of the popcorn, but perhaps the fact they’re, as Vinson calls them, “nutritional gold nuggets,” will make you feel better about having them stuck in your teeth. Thanks to that hull, popcorn is also the only snack that is 100 percent unprocessed whole grain, far better than your typical “whole grain” cereal, which only has to be 51 percent whole grain to qualify for that title.

Now for the caveats! How healthy popcorn is depends a great deal on how it’s prepared. If it’s cooked in a pot of oil, slathered with butter (or worse, butter-flavored topping like that used in some movie theatres), covered with salt or cooked as “kettle corn” in oil and sugar, then obviously, though the polyphenols will still be there, there are other concerns with fat, salt and calories.

Does this nutritional good news mean you should eat popcorn instead of, say, oranges, apples and bananas? Well, no: fruits obviously contain many other valuable vitamins and nutrients that popcorn doesn’t have.

But it does mean, if you’re looking for a satisfying snack you can actually feel pretty good about eating, you can fire up the hot-air popper without guilt.

My personal tip: use a really good olive oil on it instead of butter. Healthier, and yummy, too!

Although my daughter swears by soy sauce. But, hey, to each his or her own.

Permanent link to this article: https://edwardwillett.com/2012/03/pop-goes-nutrition/