Saturday Special from the Vaults: The Bounty Mutiny: From the Court Case to the Movie 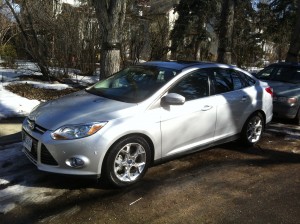 Week before last Ford graciously provided me with the opportunity to drive a brand-new Ford Focus for a few days…which I found amusing for reasons that had nothing to do with the car. See, in my YA fantasy Song of the Sword, set here in Regina, one of the villains, who tries to abduct my young heroine, drives a Ford Focus. Which is not to say that only bad guys drive Ford Focuses (Focii?). But, you know, he had to drive something, and I just like the sound of the name: very alliterative.

Fortunately, my fictional bad guy’s Focus was white, and this one was silver, so I didn’t feel too much like I’d fallen into one of my own stories. Also, this one, unlike my character’s, was the very latest model, and a high-end version, at that, with a terrific sound system and Ford’s new MyFord Touch system.

The latter manifests itself as an eight-inch touch screen that pulls together in one location many of the controls that in the past would have been knobs or buttons (although some of those knobs and buttons are still around, since Ford provides redundancy). At first glance it all seems dangerously fiddly, but that, I soon found out, was because I was using it wrong (a few days later I had an in-car demonstration from a Ford expert on the system). The whole point of MyFord Touch isn’t to get you to poke at a touch screen while driving, which obviously isn’t the best of ideas, but rather to free you from having to poke at anything at all: pretty much everything on there can be controlled by voice, and the voice-recognition software is far more powerful than in most similar systems, recognizing some 10,000 words and phrases and even being able to interpret a comment like, “I’m hungry” and throw up (pardon the expression) a list of nearby restaurants. 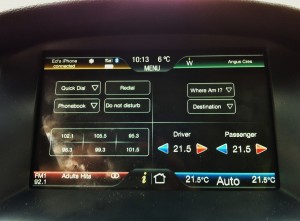 Ford actually wants you to keep your eyes on the road, not on the dashboard, and once you get the hang of the MyFord Touch system, that’s exactly what you can do. (Although, being who I am, I kept thinking of that song from Paint Your Wagon, “I talk to the trees…” with updated lyrics: “I talk to my car, but it never listens to me…” With MyFord Touch, that shouldn’t be a problem.

Better yet, the MyFord Touch system is software, not hardware: which means, when Ford decides to update (as it has already done), it can simply send out to customers a USB stick with the new software on it. Plug it in, in within 45 minutes or so your car is up to date. (I believe the Focus I was driving had the original software in it; the example I was shown later with the new software looked a bit different from what you see in the photo).

Something else I noticed on the Focus that I hadn’t noticed on last year’s vehicles was a path indicator in the rear-view camera display that comes on automatically when you go into reverse. In other words, it not only shows you what’s behind you, it shows you where the edges and center of the car will travel as you turn the wheel during your backward adventures. Very useful.

Driving-wise, I found the car nimble, especially compared to my 2002 Volvo S60, which I love, don’t get me wrong, but which has the turning radius of a small truck. Or maybe a large truck. Acceleration was not all I would have liked it to be, since I crave power, power and more power! (Oops, sorry. Let my internal villainous monologue show there for a moment.) But it was certainly acceptable, especially in a car of this size and class. 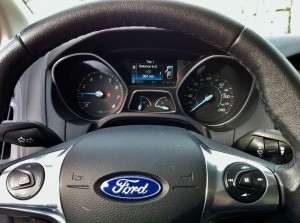 My wife and I both liked the styling. It’s a good-looking vehicle, no question about that, and if it won’t turn a lot of heads in your direction as you drive down the street, it won’t turn heads away from you in horror, either. The interior looks sharp, too. Our only negative comment was the seats, which we both found a bit firm for our taste. But our aforementioned Volvo is renowned for having comfortable seats, so we seldom find anything we like better.

All in all, an excellent entry into Ford’s parade of cars. And, no, you don’t have to be the villain in one of my books to drive one. You just need to be someone in search of a good-looking, well-put-together fun-to-drive (and fuel-efficient!) small car.

And if you do happen to be a fictional villain, well, what could be better than a car you can literally give orders to? It’s kind of like your personal henchman.

Permanent link to this article: https://edwardwillett.com/2012/03/test-drive-ford-focus/