Saturday Special From the Vaults: Introduction to Jimi Hendrix: Kiss the Sky

A new venture: audiobook of Matthew Hughes’s The Other, narrated by me, now on sale 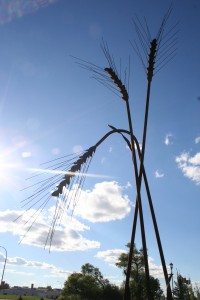 Having grown up on the prairies, first in Texas, then in Saskatchewan, I’ve seen, my whole life, the patches of white where nothing grows, out in the middle of the fields. And like most other prairie folk, I’ve tended to call them “alkali.”

Fact is, though, that most of them, at least in Saskatchewan, aren’t alkaline at all, but saline. True alkaline soils are low in soluble salts, but have a high sodium content and a high pH (over 8.5, which falls between egg whites and ammonia on the alkaline side of the pH ledger).

Saline soils are those with a lot of soluble salts in them, and although estimates vary widely, it’s generally agreed that several million acres of Saskatchewan soil are affected by salinity to some degree, with some 600,000 acres within the cultivated area of the province so badly affected they have zero productivity.

Saline soil makes life difficult for plants because it deprives them of water. In ordinary soil, salt in the sap in plant roots draws water (and dissolved nutrients) into the plant via osmotic pressure. When the water in the soil is also salty, that pressure is reduced and water doesn’t flow into the root, slowly starving the plant. In addition, sodium can build up in the plant’s leaves, interfering with photosynthesis and other important processes.

Saline soils are bad news wherever they occur, and they occur everywhere: it’s estimated that more than 20 percent of the world’s agricultural soils are affected. They’re a particular problem in the wheat-growing areas of Australia, which is the world’s second-largest wheat exporter after the United States. (What, you thought that was Canada? No, we actually rank fourth, behind Russia, and just ahead of the European Union.)

The gene pool of modern wheat is rather narrow, thanks to domestication and breeding over the years, which has made it vulnerable to environmental stress. Durum wheat, which is used for pasta, among other food products, is particularly susceptible to soil salinity.

But now researchers at CSIRO Plant Industry in Clayton South, in the Australian province of Victoria, have successfully bred salt tolerance into a variety of durum wheat so effectively that it shows an improved grain yield of 25 percent on salty soils.

And even if you’re dead-set against genetically modified wheat, you needn’t throw up your hands in horror: this improved variety was created using non-GM crop-breeding techniques. Not only that, but the scientists at the University of Adelaide’s Waite Research Institute are digging deeper into the plant to discover exactly how salt tolerance works genetically.

It all comes down to a salt-tolerant gene (TmHKT1;5-A, if you must know) which produces a protein that removes the sodium from the cells lining the xylem, the “pipes” that move water from the plant’s roots to its leaves.

The gene was discovered in an ancestral cousin of modern-day wheat called Triticum monococcum (as a Star Trek geek, I wish it was called quadrotriticale, but alas…). Through a selective breeding process, they were able to introduce that gene into a variety of durum. In field trials at a variety of sites across Australia, not only did the new salt-tolerant durum outperform its parent under salty conditions by up to 25 percent, it performed the same as its parent under normal conditions.

“This is very important to farmers, because it means they would only need to plan one type of seed in a paddock that may have some salty sections,” points out Richard James, lead author of the CSIRO Plant Industry study, which was published last week in Nature Biotechnology.

The new version of durum will now be used by the Australian Durum Wheat Improvement Program to see what the impact will be of incorporating it into recently developed varieties as a breeding line.

That means new varieties of salt-tolerant durum wheat could soon be available commercially—and since it was created through a non-GM breeding process, it can be planted without any of the restrictions sometimes placed on GM varieties.

Nor is salt-tolerant durum the end of the road for the research. The scientists have already bred the salt-tolerance gene into the kind of wheat used to make bread. It, too, is currently undergoing field trials.

The world population continues to grow, and that means a growing demand for food…which could make salt-tolerant varieties of wheat immensely valuable in the decades to come: not just in Australia, but right here at home.

(The photo: a particularly salt-tolerant variety of wheat in Weyburn, Saskatchewan, although it is rather susceptible to rust.)

Permanent link to this article: https://edwardwillett.com/2012/03/salt-tolerant-wheat/