Saturday…oh, all right, Tuesday…Special from the Vaults: Introduction to Historic Walks of Regina and Moose Jaw 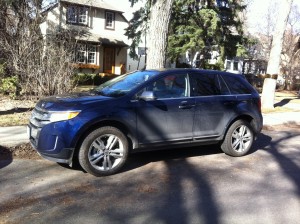 Ford, for reasons best known only to itself, continues to provide me with the opportunity to drive media cars a they come through town. Which is how, in the past few weeks, I’ve had the chance to drive a Ford Edge Limited and a Ford Fiesta SES.

Both fine vehicles, but both quite different. And for my taste (not to mention my size) there’s no question the Edge has…well, the edge.

I’ve noted in previous test drives that I’m not a huge fan of giant SUVs. But the Edge, though an SUV (well, I think Ford calls it a “crossover”), is on the smaller end of the scale (and nowhere near that behemoth of an F150 pickup I drove last year). In fact, I found it just about the perfect size: large enough to be roomy, with lots of luggage and other hauling-stuff-around space, but small enough I didn’t feel like I was driving the terrestrial equivalent of an aircraft carrier. 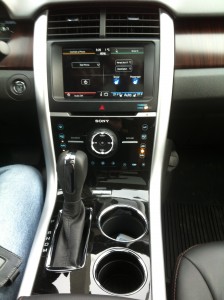 It had plenty of power, and it felt quite nimble–especially compared to (as I’ve also noted before) my Volvo S60. Love the car, but there are times when I’m trying to maneuver it that I think it’s the terrestrial equivalent of an aircraft carrier.

The Edge’s styling didn’t thrill me, but the interior was comfortable, and by this time I’m getting reasonably familiar with the Sync and My Ford Touch system–but not familiar enough with it to really pass judgment on it. At times I think it’s the greatest thing since sliced bread, but I think you’d need to live with it for longer than three or four days to really get the most out of it and get comfortable with its various modes and options. For the short period of time I have these cars, I’d have to say the touch/voice command system is more of a hazard than a benefit, since I find myself poking at the screen when I should probably be paying more attention to my surroundings.

Bottom line for me: a pretty great vehicle that offers more functionality than a car without the (for me) downside of driving a monster SUV. If I were in the market for this kind of vehicle, the Edge would definitely be high on my list. 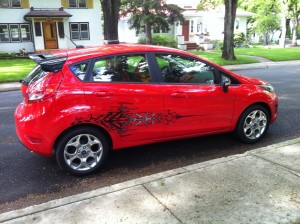 Next up was the Ford Fiesta SES. Which was…very, very red.

I kind of like the styling of this little car, although the curlicue decals on the side aren’t really my style. As far as the red-and-black interior goes, though, I think I’d have to use that classic critical statement, “If you’re the sort who likes this sort of thing, this is the sort of thing you’ll like.” It didn’t appeal to me, but I suspect 52-year-old Volvo drivers are not the target market. My wife suggested it was very much a “boy car,” although I think it might also be a “girl car”–interestingly enough, as I drove away from my house with it with my daughter in it (her comment: the dashboard looks like an alien–see the photo below) we ended up right behind a bright green version of the same car. Didn’t see if it was a boy or girl driving it, but it didn’t look like a color most young guys would go for. 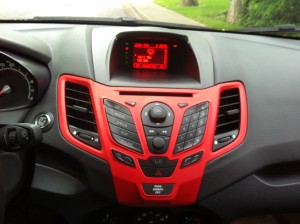 The Fiesta was a hoot to drive, though. Small, nimble, with adequate though not outstanding power (but a really nice exhaust note that certainly makes it sound to the driver as though he’s got a something exciting under the hood), it was a dream to park and a comfortable get-around-town car.

Neither my wife nor I liked the seats very much: a little firmer than we’re used to. But my biggest complain is a function of size: mine, and the car;s. I wear size-13 runners, and I found my foot tended to get hung up a little bit between the brake pedal and the firewall, so that moving from brake to gas pedal and back again was sometimes a bit of a sticky wicket. Not a big deal for a three-day test drive, but not something I could have lived with over the long term.

I also found that rear-window visibility was more restricted than I would have liked: the headrests on the back seat can’t be lowered, and essentially limit you to the view between the two of them. (One thing I like about my S60 is that there’s a button on the dash that allows you to lower the rear headrests automatically so that you have maximum rearward visibility when there’s no one in the back seat who requires head support.) 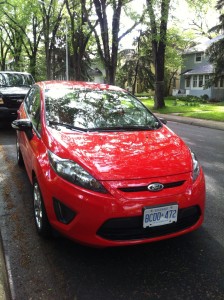 That said, were I a young man who was not 6’2″, over 200 pounds, and with size 13 feet, I would perfectly happy with the Fiesta. It’s a fun drive. And if you like that kind of…perky…styling, it would be a terrific choice.

Especially considering the killer sound system with Sirius satellite radio built in. I think the most fun I got out of the car was tooling around blasting ’70s rock tunes. Made me feel like I really was a young man in his first new car!

Permanent link to this article: https://edwardwillett.com/2012/05/a-tale-of-two-fords-edge-limited-fiesta-ses/