The Fifth Princess by Alice Willett 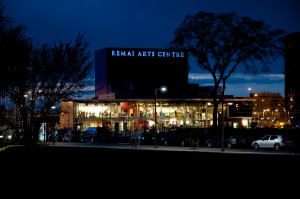 I know, I know, I call these things “Saturday Specials” and here it is Monday. But I have a good excuse: I spent the weekend in Saskatoon at Dance Power, the dance competition in which my daughter and her studiomates from Class Act Performing Arts Studio were competing (they did extremely well!).

The competition was at the Remai Arts Centre, home to Persephone Theatre, a theatre I have fond memories of because I was in the very first production to grace its stage, Beauty and the Beast, in 2007, just before it officially opened (and before it was quite finished, actually, but that’s another story). While I was there I ran into Del Surjik, artistic director of Persephone, a couple of times, and confirmed to my chagrin that (as I had suspected) the profile I wrote of him for Fine Lifestyles Saskatoon back in the fall of 2010 had never run in the magazine. (Right after I wrote it, I quit being editor and so had no say in whether it ran or not.)

So here it is. Better late than never!

(References to “last season” or “this season” obviously refer to the time period when the interview was conducted.) 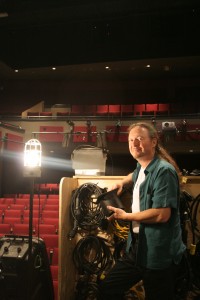 When Del Surjik, artistic director of Persephone Theatre, left Saskatoon two decades ago, “a young man seeking his fortune,” he didn’t really expect to be back.

The recipient of the first BFA in theatre awarded by the University of Saskatchewan, the North Battleford native, raised in Yorkton, had been one of the co-founders of Shakespeare on the Saskatchewan (and associate director for its first five years) and also helped found the Saskatoon Soaps.

“It was a very vibrant, golden-age time in Saskatoon’s theatre history,” Surjik says, but nonetheless, he moved to Vancouver in 1989, freelancing a national career or seven years, then spending the next decade as artistic director of Pi Theatre. “It was the indie theatre scene,” he says. “Cutting-edge experimentation. That community in Vancouver expected to see some of the most provocative and urgent thought in theatre coming from me and my theatre. It was exciting work.”

About five years ago, the late Tibor Feheregyhazi, Persephone’s long-time artistic director, asked Surjik to direct James O’Shea’s play Dogbarked. It was the first time Surjik had been back to work in Saskatoon and, he said, he “had a hell of a good time.”

Audiences had a good time, too. The show was a hit, and Surjik got to refresh his relationship with Feheregyhazi. The two stayed in touch over the next few years, during which time “he was regaling me with the tales of trying to get this building (the new Remai Arts Centre) built.” 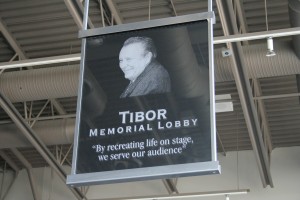 After Fehergyhazi’s death in 2007, Surjik received a message from theatre staff asking him if he would be interested in applying to take over as artistic director. In the end he was one of 35 applicants, five of whom were brought to Saskatoon for intensive, day-long interviews.

In the end, Surjik was the committee’s unanimous choice.

“My wife and I sat down and had a hard talk,” he recalls. His wife, Johnna Wright, was then artistic director of another Vancouver theatre, Solo Collective. “It would mean her resigning and setting a succession plan in her theatre company as well as the one I was at. We were very integrated in the community, we sat on a lot of boards.

“What are all the things you can change in your life?” he muses. “New city, new life, new job.” Not only that, his wife was pregnant “with our first and only family member,” son Sascha. But in a way, that made the choice easier. “The notion of being able to raise my son as a prairie boy was a un-thought of until that time,” Surjik says. “It was hugely appealing.”

And so, 18 years after he left, Surjik returned to Saskatoon, his life “circling around  like I was the character in an epic novel.”

“For me, what a fantastic opportunity to take the helm of a regional theatre and come at it with the vigour of a mid-career theatre artist,” Surjik says.

He says one of the great artistic pleasures he finds in his job is the “alchemy” of figuring out a season, “choosing those plays that continue a conversation with the audience.”

Surjik says there are several such conversations going on at once, since you are communicating, not just with those who come to everything, but people who are brand-new to Persephone or even the city as a whole.

“I stay with a demonstration of the great breadth of styles and genres there are in the world of theatre. I think that’s a responsibility as a regional theatre. There’ll be musicals, there’ll be comedies, there’ll be period drama. There’ll be new work. There’s 2,000 years of amazing variety to tap into. All these writers out there writing new work as well. We’ll keep mixing it up!”

Another consideration, Surjik says, is “finding good vehicles for the artists to bring their best work to the stage.”

“We want to nurture the local acting pool,” he says, not only people who live in Saskatchewan, but those who trained or lived here and then went elsewhere. “You have to give hope to the artists who live here that their regional theatre is a an avenue of employment. Otherwise they’re going to have to go elsewhere or withdraw from the art form.”

Co-productions, such as last season’s Thunderstick, a co-production with Theatre Network in Edmonton, and this season’s opening show, Great Expectations, with Blackbird Theatre of Vancouver, gives local artists exposure in other cities: the shows open here, then travel to the other centre.

Surjik also believes in supporting other local theatres. Last season, for example, there was a co-production with Saskatchewan Native Theatre Co. on the second stage. “The health of the entire theatre ecology is what’s important,” he insists. “We don’t live in the ecology on our own.”

That philosophy encompasses the whole province. “Ruth Smillie (artistic director of Regina’s Globe Theatre) and I have a great relationship. We made history last year by having a Globe show at Persephone: we brought in Elephant Wake. Ruth and I are hoping that with two really great strong regional theatres in the province, we can spin the momentum that’s going on.”

“They are there because they need to get done. I read them and I had no choice,” Surjis says. “I love writer, I love scripts. We don’t begin without any of these words. If we have a good script, we have the bedrock upon which we can build a really great show.” 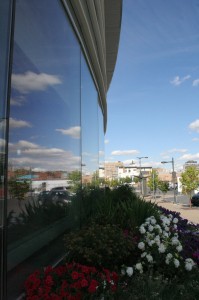 Surjik is enthusiastic about everything about Persephone, but particularly the Remai Arts Centre. “It’s extraordinary. There’s no theatre that’s the equivalent of this in Vancouver.”

Rawlco Radio Hall, the main auditorium, is “phenomenal,” he says; extraordinarily intimate. “The back wall of that theatre is 12 feet closer to the stage than the back wall of the old theatre,” he notes, and yet there are more seats, 421 in all. “And we’ve got the second stage. And a lobby that actually holds the people in the theatre. We can have two shows running at once, in the BackStage Stage and the Rawlco Radio Hall, and those audiences get to mix, which is a really cool thing.”

Even more extraordinary: the theatre was built on budget and without a mortgage, “at Tibor’s unequivocal insistence. I can’t name another project where that has happened.”

The community has embraced the facility wholeheartedly. “The community use blew us away,” Surjik says. “There’s something like 500 days of combined use in a 365-day year. It’s a very busy place!”

And so, brand-new though it is, the Remai Arts Centre will soon be expanding, taking advantage of the impending arrival of a new neighbor: the Art Gallery of Saskatchewan, formerly the Mendel Art Gallery, which will be built on Persephone’s current parking lot.

“This is going to become a cultural block,” Surjik says, and since the new building is going to wrap around the theatre, Persephone plans to take advantage of it to enlarge the second stage, add additional dressing rooms and stage-management office space, and expand the shop area.

And don’t mourn the lost parking lot: it’s going underground, which should literally warm the hearts (and other body parts) of January theatre-goers.

A heritage of culture

Persephone’s amazing growth is a testament to this province, Surjik thinks. “This province’s people care about their lives having a cultural component. We have a heritage of it.

“It’s part of a questing life. If you are living a full life, you’re asking questions, you’re testing your beliefs and opinions against others’, you are in contact with your community. These are all important things to having an agile, healthy and forward-thinking society.”

And that, he thinks, is the kind of society blossoming in Saskatoon. “There’s a cycle in the arts where a city is hot,” Surjik says. “Toronto was hot. Edmonton was hot for a while.” Now, he believes, “the eyes of the nation are going to turn and look at Saskatoon.

Permanent link to this article: https://edwardwillett.com/2012/05/saturday-er-monday-special-from-the-vaults-an-interview-with-persephone-theatre-artistic-director-del-surjik/