Where the germs are 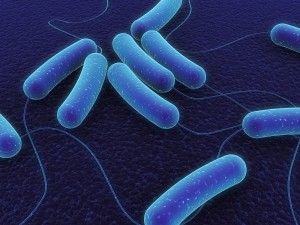 Ah, vacation time! Relaxing by the beach or in the mountains, retiring at night to a filthy hotel room, crawling with germs…

Okay, that might be a slight overstatement of the hygienic challenges of hotel rooms, but the fact remains that hotel rooms are, ultimately, public spaces, inhabited by hundreds of different people over the course of a single year, each one bringing with them his or her own cute little collection of germs.

Hotel rooms are, of course, cleaned daily (at least in the better hotels), but, alas, you can’t see germs, so just because a room looks clean doesn’t mean it is clean on a microbial level. Researchers from the University of Houston, Purdue University and the University of South Carolina therefore set out to find out exactly where germs lurk in hotel rooms.

They presented their study on June 17 at the 2012 General Meeting of the American Society for Microbiology in San Francisco, with Katie Kirsch, an undergraduate student from the University of Houston, doing the honors.

Kirsch noted that while “hoteliers have an obligation to provide their guests with a safe and secure environment,” currently, “housekeeping practices vary across brands and properties with little or no standardization industry wide” and “the current validation method for hotel room cleanliness is a visual assessment, which has been shown to be ineffective in measuring levels of sanitation” (because, duh, as I believe I just said, you can’t see germs!).

Kirsch noted that housekeepers typically clean 14 to 16 rooms per eight-hour shift, spending about 30 minutes on each room. If they knew which items were high-risk, housekeeping managers could better design cleaning practices to reduce the potential health risk of microbial contamination.

To that end, the researchers sampled a variety of surfaces from hotel rooms in Texas, Indiana and South Carolina, testing the levels of total aerobic (oxygen-using) and coliform (fecal) bacterial contamination on each of the surfaces.

While some of their findings weren’t exactly a surprise—the toilet and the bathroom sink were typically highly contaminated—they also found high levels of bacterial contamination on the TV remote and the bedside light switch. Worst of all, some of the highest levels of contamination were found in items from the housekeepers’ carts (such as sponges and mops). That means that, potentially, housekeepers could actually cross-contaminate rooms as they move down the hall.

(For the record, surfaces with the lowest contamination included the headboard, the curtain rods and, interestingly, the bathroom door handle, maybe because people are more likely to wash their hands just before using it.)

Now, before you run screaming from the hotel room where you’re reading this, the researchers can’t say whether or not the bacteria they discovered can actually cause disease. Still, clearly these are the places where bacteria may lurk, and so if there are disease-causing bacteria around…say, during an outbreak of some kind…this is where they’re most likely to be found. Contamination also poses risks for those whose immune system is compromised, due to illness or medical treatment.

It should also be pointed out that this was a very small study: just three rooms in each state, and 19 surfaces in each room. Still…and I think I speak for everyone when I say this…yuck!

There is a move afoot to improve hotel cleanliness by applying something called the Hazard Analysis and Critical Control Points (HACCP) system. Originally developed by NASA, it’s described as “a systematic preventive approach that identifies potential physical, chemical and biological hazards and designs measurements to reduce these risks to safe levels.”

Besides the general public health argument for better hotel room hygiene, there’s a business argument to be made. After all, people are far more likely to stay at a hotel with high levels of cleanliness and sanitation.

“The information derived from this study,” says Kirsch, “could aid hotels in adopting a proactive approach for reducing potential hazards from contact with surfaces within hotel rooms and provide a basis for the development of more effective and efficient housekeeping practices.”

Now if only they could do that before we go on vacation this summer. In the meantime…

“Dear, where did we put those Lysol wipes?”

Permanent link to this article: https://edwardwillett.com/2012/06/where-the-germs-are/