No need for gas-price conspiracy theories

Saturday Special from the Vaults: The Shelter 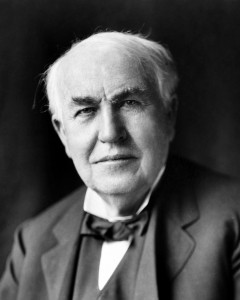 Thomas Edison gave us many wonderful inventions, mainstays of 20th century life. However, since he died in 1931, you might be forgiven for asking, “What has he done for us lately?”

Him personally, not so much, what with being dead and all: but one of his inventions has just taken on new life, thanks to scientists at Stanford University.

Back in 1900, fully 28 percent of the cars built in the United States were electric. While they didn’t put out a lot of power (a kilowatt or two—by comparison, the Model T’s engine put out the equivalent of 15 kilowatts), they were considered viable alternatives, especially in the city.

And as Edison himself wrote, “There are no whirring and grinding gears with their numerous levers to confuse. There is not that almost terrifying uncertain throb and whirr of the powerful combustion engine. There is no water circulating system to get out of order—no dangerous and evil-smelling gasoline and no noise.”

Of course, in order to have a viable electric car, you had to have a viable rechargeable battery. King of the hill was the lead-acid battery.  Invented in 1859, it was used in most electric cars until about 1900, when alternatives began to appear—including Thomas Edison’s invention, the nickel-iron battery.

His battery’s advantages included a virtually unlimited useful life and a much safer combination of ingredients. Its downside? A bank of nickel-iron batteries had roughly twice the volume and weight of a bank of lead-acid batteries with the same performance…and cost some $600 more, equivalent to a $10,000 surcharge on a modern car.

Whatever they’re made of, all batteries work more or less the same way. Every battery has three parts: an anode, a cathode, and the electrolyte. The cathode and anode (the positive and negative ends of a flashlight battery) are hooked up to an electrical circuit.

The electrochemical reaction in the battery causes electrons to build up at the anode, creating an imbalance between it and the cathode. The electrons naturally try to redress this imbalance—but they can’t get to the cathode inside the battery, because the electrolyte prevents it. Instead, they take the only path they can, through the electrical circuit.

In Edison’s nickel-iron battery, the electrolyte was potassium or sodium hydroxide, rather than acid, and the battery contained no lead or other heavy metals, making it free of the risk of acid spills and reducing the environmental risk of its manufacturing and disposal. It was a popular backup power source for railroads and mines and other industrial uses for decades…but it largely went out of favor in the mid-1970s because of its drawbacks: slow to charge, slow to discharge.

That’s where Stanford University comes in. Honglie Dai, a professor of chemistry, and his colleagues found a way to create an ultrafast version of the nickel-iron battery that can be fully charged in about two minutes and discharged in less than half a minute, a thousand-fold increase in speed.

To do so they combined Edison’s old technology with cutting-edge nanotechnology. They used graphene—sheets of carbon only one atom thick—and multi-walled carbon nanotubes, consisting of about 10 concentric graphene sheets rolled together. By growing nanocrystals of iron oxide onto graphene, and nanocrystals of nickel hydroxide onto carbon nanotubes, they created a battery whose electrical charges could move much more quickly between the electrodes and the outside circuit.

Although this new style of nickel-iron battery, even if scaled up (Stanford’s version is only powerful enough to operate a flashlight) probably won’t replace lithium-ion batteries in today’s electric cars, it could assist lithium-ion batteries by giving them a power boost for faster acceleration and regenerative braking, and might be especially useful in emergency situations where things need to be charged very quickly.

More importantly, this work opens up the possibility of improving battery technology in general. “It’s different from traditional methods, where you simply mix materials together,” says Dai. “I think Thomas Edison would be happy to see this progress.”

In fact, you might say he’d get a real charge out of it.

Permanent link to this article: https://edwardwillett.com/2012/07/edisons-battery/